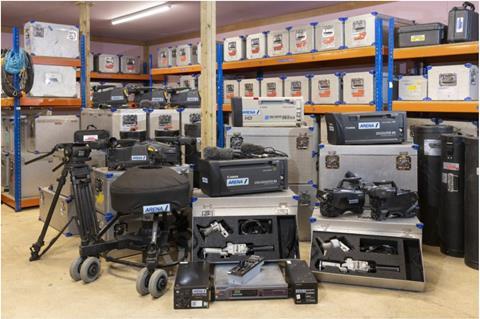 Hickman Shearer and CA Global Partners have announced a second Arena TV sale will take place on 4 May.

An estimated £1 million of equipment will be up for grabs, after £8 million was raised from the original three-day auction, with private treaty sales, in February. The first sale included over 3,000 lots, from outside broadcasting trucks to cameras, lenses, and hundreds of kilometres of cabling, and had more than 850 bidders from over 50 countries.

The new sale will be conducted via live webcast on 4 May, and will conclude the Arena assets dispersal. The items available include cameras, lenses, grip, an OB trailer, tenders and outside broadcasting production gear. Updates for interested parties are available here, and you can see the full list of available items below this story.

Tim Chapman, managing director of Hickman Shearer, said: “Recovering the value of assets in as effective and timely a manner as possible on behalf of creditors is a vital aspect of any administration process like this. The results from our February dispersal, which went considerably over estimate, show that the modern auction process is an excellent way of achieving this.”

Dan Main, EMEA director for CA Global Partners, added: “We anticipate just as much enthusiasm for the offering this time around.

“The quality of the equipment and professionalism of the teams that looked after it is second to none, and it is extremely rare to see equipment of this standard available at auction.”

Arena TV suddenly collapsed in November 2021, with administrators Kroll since revealing that the company owed £282 million to 55 lenders. £182 million of that was unsecured, meaning 46 lenders “do not have recourse to any assets”.

The administrator’s report also revealed that Arena TV directors made “the decision to cease trading shortly after” an agent attempted to verify a serial number with an equipment manufacturer. They were told it didn’t exist and then sent a query to the lender about the concern.

Since then, supplier Sentinel Broadcast’s relationship with the company has come under the microscope and director Paul Froom has allegedly appointed criminal defence lawyers. There have also been accusations that employees were made to work while on furlough while at the company.

Two arrests have been made to date by the Serious Fraud Office.