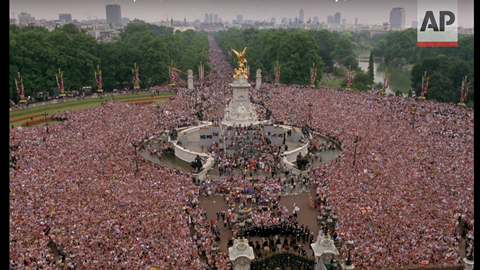 Brief To rescan and grade the original footage of the 1981 wedding of Prince Charles and Lady Diana Spencer in 4K.

How it was done The British Movietone news archive, which was acquired by Associated Press last year, spans the years 1895 to 1986. It was originally shown in UK cinemas twice a week. Movietone’s footage of the royal wedding was the official movie of the day and is the highest resolution of footage known to exist – it was the only company to film the ceremony and celebrations on high-quality 35mm film. All other broadcasters captured the event on much inferior quality Standard Definition video tape.

Despite the high resolution of the capture, the quality of the video now looks extremely poor compared with today’s 4K productions. 35mm film has the inherent resolution to enable transfers to 4K resolutions and even higher, so Associated Press decided to bring in archive restoration specialist R3store to transfer the footage of the wedding movie to 4K. This more than doubles the number of pixels compared with HD.

Digitising the three large reels of film that made up Movietone’s wedding archive took the R3store team an entire day. First, the film was checked thoroughly for tears and stains. It was then fed through a machine that bathes the footage in dry cleaning fluid to prepare it for the scan. The film was then scanned frame by frame in 4K.

Head of grading Gerry Gedge said the increased resolution of the rescanned images means that “if you were a face in the crowd outside Buckingham Palace, you could probably now pick yourself out there”.

The detail in the image is so clear that the creases in Princess Diana’s meringue-style dress and 25-foot train, which were crushed in the carriage ride to the cathedral, can easily be picked out.

Colourist Andrew O’Hagan added: “Getting original negative is always the best part of a job as you know it is the absolute source material – it hasn’t been copied, it hasn’t been printed into multiple versions and it’s almost guaranteed to be the best quality.”

The full 4K version of the wedding, as created by R3store, is now available on Associated Press’s YouTube channel. Movietone’s original unrestored footage can still be viewed here. The difference in quality is immediately apparent.

Associated Press vice-president of sales Alwyn Lindsey said: “The fact that British Movietone filmed the wedding on 35mm film has allowed AP to make the video available for the public to enjoy at a quality never seen before. The restored 4K film is simply stunning and a world away from the 1980s videotape versions with which we’re familiar.”