How LIT built a control room mid-lockdown for UK launch

Co-CEO and co-founder Adrian Woolfe, and head of broadcast engineering Chris Farrants told Broadcast Tech about launching an OTT entertainment channel over the past year. 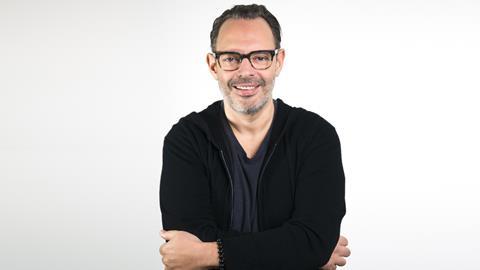 “We never planned to launch in a pandemic,” admits LIT co-CEO and co-founder Adrian Woolfe. “We had been looking at launching in LA last summer, but then we had to leave the US on the 12th March just before it closed its borders.”

However, the OTT entertainment news channel hasn’t let the past year slow it down too much.

Today LIT announces its first UK distribution deal, with Samsung TV Plus to host a free 24-hour channel on its service. This comes after LIT has launched in the US earlier this year, with NBC platform Peacock and Vizio SmartCast, with Plex also offering the channel and Indonesian channel Kaskus using it as programming. In addition, you can watch online here.

At first, the UK version will use the same content as the US, with current hosts Bradford How, Sloane Glass and Ruba Wilson. However, there are plans to add to that in the future.

Ahead of its first foray into the UK market, Woolfe and head of broadcast engineering, Chris Farrants, spoke to Broadcast Tech about how they have managed to build a control room and launch a TV channel in mid-lockdown London.

“We had to make a decision whether to wait 18-24 months or have a go at doing it remote,” Woolfe continued. “Because I’m slightly crazy we just went for it. I actually built the first control room on my dining room table, before we then moved it to our offices in West London. 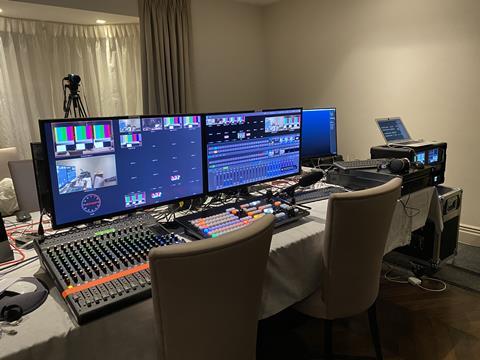 In the early days Woolfe used an all in one TriCaster for the switcher, but it wasn’t long before LIT outgrew that and replaced it with a Ross Carbonite Ultra – partly as an early plan to use Skype for broadcasts fell through due to technical difficulties.

“The biggest challenge was making it feel natural,” Farrants confirmed. With the three hosts in three different cities across the US, and the control room in the UK, latency was a big issue.

“We first looked at using Skype and struggled,” Woolfe explained. “It had to be pretty perfect with three anchors on air. Now we are using Quicklink, which has been seamless with very low latency.

“We basically send our signals over public internet. Our hosts are relying on their ISPs at their end. It has to work for three hours a day [currently there are daily three-hour live broadcasts that are then looped] and except for a few blips it has been very reliable.” 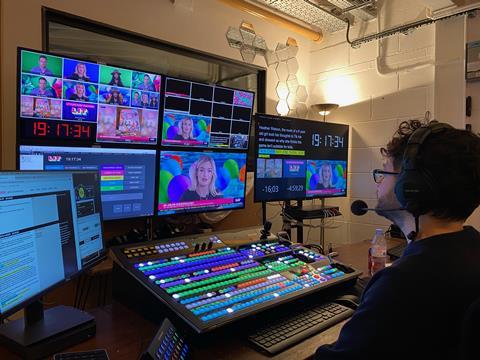 Farrants added: “During US election week we saw more glitches, which we think was because there was simply so much data being sent over the Atlantic.

“The latest Quicklink release prioritises the audio, and we haven’t lost audio since then.”

When audio or visuals are lost, engineers have to adapt. Woolfe said: “Our team is very quick to cut to a two shot instead of the three when there’s an issue– and the audience won’t notice.

“For example, our host in Philadelphia had a power cut, and there just isn’t anything you can do about that. However, we were able to deal with it.”

Other areas of innovation have been the prompt, which can be testing in a live news environment, and looping the broadcasts.

“Traditionally it’s linked in in a news system,” Farrants said of prompt. “But we can’t have a script for three hours straight – so we have Google Sheets systems that hold all the data and do what a news system would do with immediate updates linking into prompt.

“One of the first projects I had at the company was to, in two-and-a-half to three months, have a producer in NYC editing script able to press enter, and have that come into the prompt system immediately.”

He added: “There is a lot of custom engineering with Amagi to run live from 5-8pm and then repeat. Traditionally outside of a one-hour or 24-hour delay it would have to go through editing, but we don’t have editors or an edit suite to repackage it. We get it straightaway with metadata and closed captions data to broadcast immediately.”

Further innovations will likely be needed as LIT grows its content, with the Samsung TV Plus deal expected to be followed by more. Extra content will be added too, with eight hours a day live expected by the summer, and eventually 16 hours live a day with four content teams. 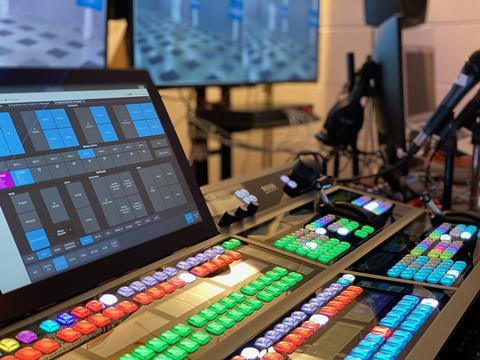 Woolfe also divulged: “There will be a difference between LIT Entertainment News and the LIT channel. The channel will be broader, with some celeb adjacent long form in the future.

“We will also introduce some UK content over the next weeks and months. Generally, you will see local versions of LIT as well as a global feed. For example, we already have partnership agreements in India and China signed although it will be some time before they launch.”

A new team of hosts has already been recruited, all Americans who live in the UK, and Woolfe revealed LIT “are planning a UK studio in our West London offices, and eventually we want to match that in LA.”

It is only recently that these kinds of innovations have been possible, Woolfe believes: “It costs a fraction of what it did 3-5 years ago.”

Farrants also thinks recent changes have helped: “The huge reliance on SaaS nowadays has played to our advantage. That allows very quick growth with playout. It can spin out very quicky from small scale and add to that.”

However, even so, with what he’s asking for, Farrants admitted: “Lots of people say to us, ‘no-one has asked for that before!’”