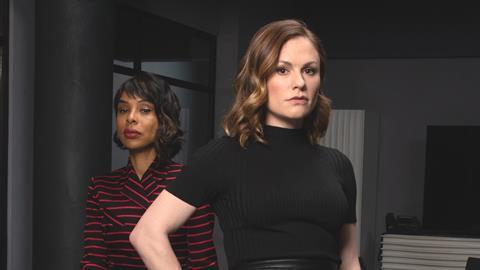 “We are not selling this as a piece that is great for women. We are hoping it will sell well because it is good-quality programming”

The six-part series follow her lead character Robyn, an American living in London, as she struggles to make the best of a string of bad situations in her professional and personal life.

The show was created and exec produced by Oliver Lansley, the actor, writer and theatre director best known for creating BBC2 sitcom Whites and starring as Kenny Everett in BBC4 biopic The Best Possible Taste.

Lansley, who has a pedigree in comedy, has injected some humour into the series and Paquin says his script walks a “fine line” between character-driven drama and intelligent humour.

“My character, Robyn, exists in a world where there are no moral absolutes and humour is used as a sharply executed defence mechanism to maintain the illusion of perpetual control,” she adds.

The series, directed by The Full Monty’s Peter Cattaneo, was produced by Hat Trick Productions and Paquin’s label CASM Films.

UKTV is co-producing the series with CBS- and Lionsgate-owned US cable network Pop TV, and it will debut in 2019.

Pop executive vice-president of original programming Justin Rosenblatt says the series is a “poignant” look at how, for better or worse, news happens in a breath. It centres around four female characters: Paquin, her boss Caroline (Sophie Okonedo), sister Ruth (Genevieve Angelson) and best friend and colleague Eve (Lydia Wilson).

While the female-heavy cast “sets it apart” from other high-end dramas, it will not be used as a selling point, according to Hat Trick International (HTI) director of sales Sarah Tong.

“We are not selling this as a piece that is great for women,” she says. “We are hoping it will sell well internationally because it is good-quality programming.”

HTI has the global distribution rights for the series outside the UK and US. In its last drama auction, ITV’s Northern Irish mini-series The Secret sold to 101 countries, including Starz in the US.

At Mipcom, HTI will turn its attention to Canada, Paquin’s birthplace, having secured a presale from TVNZ in New Zealand, where her mother is from. Tong is confident that Paquin, known for portraying Sookie Stackhouse in True Blood and Rogue in X Men, will aid with international sales.

“It makes it less of a risk for broadcasters when they know there’s a big name in it,” she says.

Tong will be selling the series globally, with English-speaking Australia an obvious choice, followed by dubbed or subtitled versions in Europe and Asia.

Flack is a post-watershed series and is therefore more likely to be picked up by a local or regional SVoD service or pay-TV platform in markets such as Asia, Tong says.

With the UK and US markets off the cards, she believes it is unlikely the key SVoD services will bite. “They won’t be able to pay a competitive fee if those two territories are gone,” she says.

Lansley has ideas for a further two series and is hoping it will return.