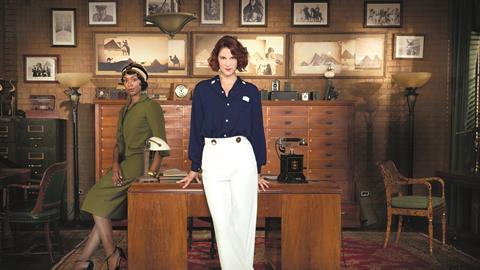 Follows Toronto’s only female private detective in the 1920s

Shaftesbury’s 11 x 60-minute series follows Toronto’s only female private detective in the 1920s as she takes on the cases the police don’t want to touch, or can’t handle.

Defying gender stereotypes and rebelling against convention, Frankie and her sidekick Trudy find themselves fighting crime in an age of flyboys, gangsters, rum-runners and speakeasies.

They take on cases that explore every cross-section of Toronto, from gospel church choirs, bathing beauties and the early cinema scene to the homes and parties of the city’s elite.

The show is from the same creative stable as CBC’s Murdoch Mysteries, which is now up to 11 seasons and has been sold around the world. It has aired on UKTV’s crime channel Alibi since 2008 and the broadcaster has picked up the UK rights to the new show.

“It has the same light procedural tone and stylish period setting that appealed to buyers of that show,” says Greg Phillips, president of distribution at Kew Media Group.

“We certainly view it as the kind of drama that can work in most major territories. Having a trusted producer like Shaftesbury behind the show also helps, as it encourages buyers to come in early.”

Story of the week

Phillips is not prescriptive about which platforms the show will work best on, but is confident it can find slots on free-to-air TV.

“We have some great heavy-duty drama in our catalogue, like Line Of Duty, but this is more the classic ‘story of the week’ whodunnit genre that audiences watch to relax,” he says.

Christina Jennings, chair and chief executive of Shaftesbury and an executive producer on the show, says the 1920s is an interesting time period that will resonate well with international audiences.

“From Gatsby-esque garden parties to rough-and-tumble speakeasies, there’s a global appeal to the 1920s,” she says. “This was a time in Toronto of booming construction, considerable population growth and a major shift in the role of women.”

This gender theme goes well beyond the lead characters. “Frankie and Trudy work with a network of associates, from Mary, who works in the police station as a morality officer, to Flo, who works in the morgue,” says Jennings.

“We are going to see women fighting crime and the system – a lot of action and a lot of fun.”

The lead role is played by Lauren Lee Smith, a familiar face from The L Word, CSI, The Listener and last year’s hit series This Life.

The series was created by Carol Hay and Michelle Ricci, who also serve as executive producers. It was developed and produced by Shaftesbury in association with CBC and UKTV, with the participation of the Canada Media Fund, the Canadian Film or Video Production Tax Credit, the Ontario Film and Television Tax Credit, the Cogeco Programme Development Fund and the Bell Fund.

“UKTV’s early participation in the show is a good indicator for our sales effort,” says Phillips. “A lot of episodes are in the can, with CBC planning to air the series in late 2017 and UKTV scheduling it for early 2018.”

Another factor that appealed to Kew is the number of episodes, says Phillips. UK shows often start out with around six, while the standard order for many global dramas is now in the 8 to 10 range. “Eleven is a good volume to offer our buyers,” he says.