5
Hot Picks: The Other Guy 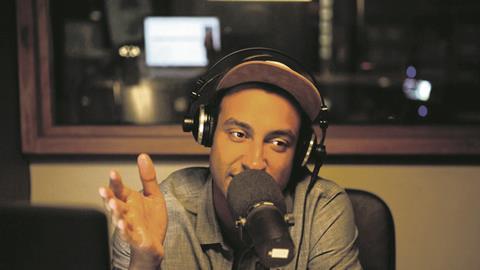 Hot Picks: The Other Guy

In creating comedy drama The Other Guy, comedian Matt Okine set out to make a show that was “distinctly Australian”, rather than pandering to the Crocodile Dundee-style stereotypes that international audiences are more used to.

“This show isn’t about the outback or anything like that – it’s about the relationships of young people, who are speaking the way that Australians do,” he says.

Okine stars in the six-part series as successful radio host AJ Amon, who finds himself back in the dating pool after 10 years when he discovers that his long-term girlfriend has been having an affair with his best friend.

The show is based on one of Okine’s stand-up routines, which was seen by Aquarius Films, producer of feature films such as Lion and Berlin Syndrome, and adapted into a TV series with Okine on board as an executive producer and co-writer.

“When we sat down very early on, we had a meeting with eOne and fleshed out what we were hoping to make,” says Okine.

“The question was: do we aim to go for a big network in Australia and water down our idea, or do we go somewhere where we can stay true to the dream, even if it comes with a bit of a smaller budget?”

Regional SVoD platform Stan turned out to be the best home for the show, with Okine prioritising the freedom to make the show he wanted over commercial factors.

Why not Netflix? After all, the SVoD giant has begun making strides in Australia, commissioning its first original, drama Tidelands, in May.

“Stan is making long-form Australian content,” says Okine. “Netflix was still behind the game in that capacity. Stan is hungry and you can really tell. It is expanding, the viewership is growing and there is excitement about it. You feel it’s a contender.”

”Networks can’t rest on their laurels like they used to. They are all of a sudden putting their hands in their pockets again”
Matt Okine

Okine says Stan’s rollout plan and significant marketing spend on the show is “going to make a few people quiver in their boots”.

“The Other Guy is one of the frontrunners in terms of pushing the fact that Australian audiences can and should look elsewhere,” he says. “Networks can’t rest on their laurels like they used to. They are all of a sudden putting their hands in their pockets again.”

Comedians such as Luke McGregor and Ronny Chieng have also begun breaking through with their own TV shows.

“For a while, networks were barely making anything that wasn’t a competitive cooking show or a home renovation show,” says Okine. “Companies like Stan are 100% our allies. When other comedians see a show like ours get airtime, it gives them a lot of hope.”

He adds that “many comedy pilots” are in the works and a “big culture in the comedy scene is taking over the TV writing landscape”.

The Other Guy is being launched by eOne in Cannes and The Walking Dead distributor is already in discussions in several markets.

The firm is also selling Canadian legal drama Burden Of Truth. The 10 x 60-minute CBC series, produced by ICF Films, eOne and Eagle Vision, stars Smallville’s Kristin Kreuk as a big-city lawyer who returns to her home town to take on what she thinks is a simple case, only to find herself in a fight for justice for a group of sick girls.

In May, Canada-headquartered eOne revealed that it was combining its film and TV divisions, which are now jointly managed by eOne Television chief executive John Morayniss and global film group president Steve Bertram.

International distribution boss Stuart Baxter says the merger, which is designed to bolster its creative partnerships and distribution division, grew out of a rising awareness that “the distinction between film and TV is artificial”.