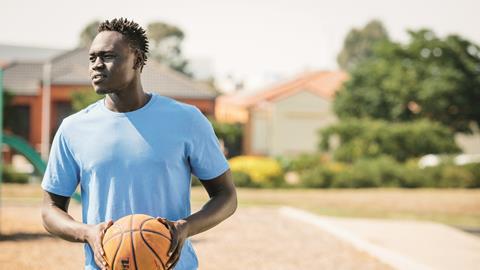 The story of a Sudanese-Australian basketball player who finds himself in the wrong place at the wrong time, it aims to shine a light on the South Sudanese community living in the outer Melbourne suburb of Sunshine.

The show’s protagonist, Jacob (played by newcomer Wally Elnour), is on the verge of being picked up by US scouts for a college league when he is caught up in a police investigation involving a teenage girl from one of Melbourne’s affl uent suburbs.

Ian Collie, who runs Sunshine Kings producer Easy Tiger, the scripted indie in which Fremantle recently acquired a majority stake, says the drama has parallels with HBO’s Emmy-winning crime thriller The Night Of.

“We’ve weaved in flashbacks once the boys are interviewed by police, to tantalise,” he says. “Each episode has a hook – there’s a bingewatching element to it – but it’s also a sports movie: Jacob’s team is not doing well, they are underperforming until a frustrated local coach, motivated purely by selfinterest, agrees to come on board.”

The series, commissioned by SBS head of drama Sue Masters, manages to strike a deft balance between established actors and promising newcomers.

The coach is played by Anthony LaPaglia (Without A Trace), while the lawyer Jacob must answer to is played by Melanie Lynskey, star of HBO’s Togetherness.

“We modified the script to make it sound more natural, less wordy and to get the slang and the language right”
Ian Collie, Easy Tiger

The production team visited Melbourne’s South Sudanese community to cast Jacob and his friends and it was developed in close consultation with them.

“We knew we needed at least three boys who could play basketball really well,” says Collie. “Once those roles were cast, we modified the script to make it sound more natural, less wordy and to get the slang and the language right.”

The producer acknowledges that Australia’s newest migrant group was a rich source of material for writers Matt Cameron and Elise McCredie, who found former child soldiers as well as sons with absent fathers who are still fighting the war in Sudan.

“Some members join gangs and get in trouble and there’s some unfortunate stereotyping that goes on in the Australian media,” says Collie. “This series’ aim isn’t to correct that but to reflect the many facets and challenges they face.”

Sunshine Kings will air as an SBS event show in a primetime slot on Tuesdays and Wednesdays. Fremantle Media International director of scripted acquisitions Rebecca Dundon says the universal issue of immigration will help it travel.

“It’s such a hot topic, and this is an extremely compelling crime series about identity, belonging and equality with a really distinctive feel,” she says.

Dundon expects the drama’s coming-of-age story, combined with a compelling crime narrative, to appeal to young and older audiences alike.

With direction by Daina Reid and cinematography by Bruce Young, Dundon says its streetlight-flooded night-time scenes give the series a filmic quality, and compares it to 2017 Oscar-winner Moonlight.

“It’s a crime story beautifully layered around the story of these boys and their aspiration to achieve something. It shines a light on a community that we’ve not seen on screen much before.”