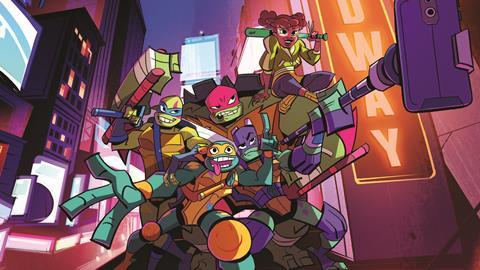 ‘The turtles have been given fantastical ninja powers, as well as new weapons and vehicles’

New York’s pizza-loving quartet have burst up through the sewers with new superpowers, new weapons and new villains to combat.

While “reinvention is part of the Turtles’ DNA”, says Viacom International Media Networks vice-president for international content sales Lauren Marriott, this reboot is arguably the most radical yet.

For starters, the turtles are now all different breeds, with Viacom, which has owned the rights to the franchise since 2010, assuming its Gen-Z audience knows more about natural history than previous cohorts.

The fact that they are all different ages has also been accentuated. “The idea is to give the show a totally different look and feel,” says Marriott. “It’s more comedic than previous outings, which is all based on audience feedback.”

Along with comedy, there is also more high-concept action. “The Turtles have been given fantastical ninja powers, which are character-driven, as well as new weapons and vehicles,” says Marriott.

In keeping with the show’s comedic aspirations, the voice cast includes Silicon Valley’s Josh Brener as Donnie and Ben Schwartz (Parks And Recreation) as Leo. The Vampire Diaries’ Kat Graham, meanwhile, will be the first African-American to play the turtles’ human ally, April O’Neil.

While these new features may draw in the franchise’s core demographic of six to 11 year-olds, it’s the villains that are likely to appeal to the series’ legion of superfans.

Mirage, the original creator, is no longer involved in the franchise and the production work is now handled by Nickelodeon in Los Angeles, with animation duties carried out at Flying Bark in Australia and Digitoonz in India.

The animators have opted for a ‘lighter’ 2D look, but have also created a darker underbelly in the form of a hidden city beneath the New York cityscape, said to be inspired by 1980s martial arts fantasy Big Trouble In Little China.

The first season of the reboot debuted on 17 September in the US, with global rollout set for the autumn. Nick’s faith in the franchise is strong: toy merchandise will roll out this month and a second 26-part season is already under way.