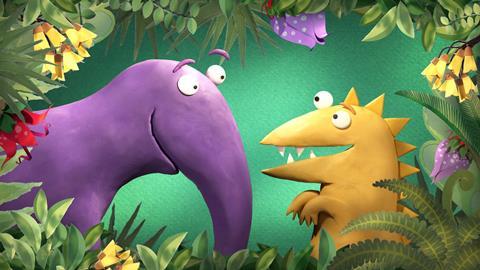 “Right now, the market is flooded with CG ‘bubblegum’ shows but this fills another need – it’s gentle as well as being entertaining and funny”

Antony Elworthy, the lead animator on Wes Anderson’s Isle of Dogs, is now taking on kids’ TV with a stop-motion series featuring two prehistoric creatures, which aims to teach pre-schoolers about friendship and kindness.

The Kiwi artist, whose other credits include the acclaimed features My Life As A Courgette and Tim Burton’s Coraline, handcrafted the mismatched dinosaurs Kiri and Lou from paper and clay.

The 52-episode property, produced through New Zealand-based animation brand Stretchy and Canada’s Yowza Animation (Welcome To The Wayne, Curious George), was quickly snapped up by independent distributor Cake, and is scheduled for launch at Mipcom.

“It’s a unique-looking show that is incredibly touching and it has a cuteness and style to it that I haven’t seen in the pre-school space in a while,” says Cake chief commercial officer and managing director Ed Galton.

“Right now, the market is flooded with CG ‘bubblegum’ shows but this fills another need – it’s gentle as well as being an entertaining and funny series.”

The characters all have their own emotional needs and this is handled in a way that Galton describes as “both warm and moving’. “Stop-motion can be very non-fluid and cold, but this is the opposite.

The lighting is incredible,” he says. “It’s fluid in movement and background, it achieves a robust level of warmth, and it’s very heartwarming.”

The narrative centres around Kiri, a feisty character with overpowering emotions, and Lou, who is gentle and thoughtful. They are joined by motherly Pania, who offers advice; sensitive Dalvanius, who disappears completely when he feels shy; and Sorry, a small but extremely fast and caring animal.

Together the characters navigate their way through different feelings via adventures and music – there’s an original song in every episode.

The project comes with an array of Kiwi talent attached including Flight Of The Conchords’ Jemaine Clement, who voices the series, while its director Harry Sinclair and producer Fiona Copland made their names in a string of relationship- based indie features.

The show is set to air on TVNZ in New Zealand and CBC in Canada next year, with Cake handling the international rights and Wow Dadi overseeing Greater China.

According to Galton, the show is aimed at three to six year-olds and is gender-neutral in terms of appeal.

He expects it to perform well in northern and southern Europe, Asia and the US. “It’s a strong enough property to appeal to a wide range of territories,” he says.