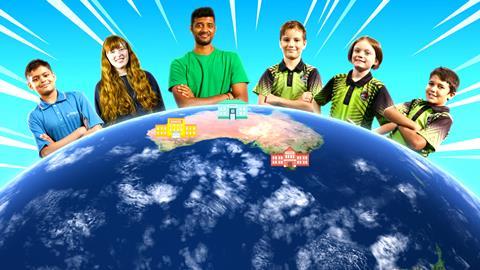 “It’s a subject that we feel passionate about, and as a show it’s entertaining and manages to create debated”

It was created by Sally Browning at Emerald Films after her son voiced concerns about our planet’s future.

“He said he was afraid of what my generation has done to our planet, what it means for his future and whether his generation has control,” she says. “So I wanted to find a way to bring the benefits of sustainability to a TV audience.”

The resulting show, Project Planet, aims to become a global TV format in which children empower their peers to make a difference.

Five students with a passion for environmental issues are anointed as ‘Waste Warriors’ and charged with leading a sustainability drive at three diverse schools.

Each week, the warriors are given surprise challenges – such as looking at ways in which they can get rid of old electronic items. Each task is designed to demonstrate how small actions can make big differences.

Alison Rayson, whose firm Raydar Media has taken international distribution rights, says appetite for shows that push for social change has filtered down to children’s.

“As a company, it’s a subject that we feel particularly passionate about, and as a show it’s entertaining and manages to create debate,” she says.

Rayson adds that the live-action market has “really evolved” and that “children’s buyers seem braver than they used to be”.

The kids that feature in the show are upper primary school and in its home territory it aired on ABC Me – a dedicated digital and broadcast service designed for primary school-age children.

Rayson says the show garnered high co-viewing figures in its 4.30pm timeslot on Wednesdays and Thursdays and the production company is now developing a prime-time version.

In terms of the territories Project Planet is likely to perform well in, Rayson says it has “broad entertainment appeal” suitable for PSBs, commercial channels and streaming services, and is being sold as both a format and a finished tape.

“It would be great to see US, British and German versions,” she adds. “Each country would take a different approach, but with the Australian version, you really see the reality of what is happening to our landscape.”