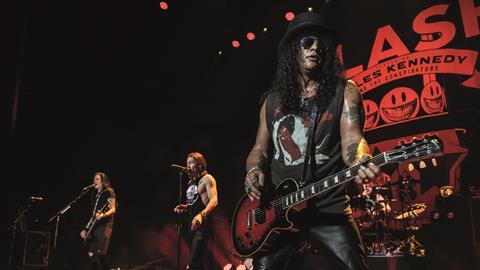 A forthcoming concert film from Eagle Rock captures an incendiary performance by guitar god Slash and singer Myles Kennedy, all shot and finished in UHD HDR. Michael Burns goes backstage to find out how it all came together

How do you go about filming a rock legend? “You have to understand the artist and their music and fans, and translate that vibe onto the screen. This is a rock ’n’ roll show – no bells, whistles or gimmicks. It’s five guys on stage singing and playing,” says film-maker Jim Parsons.

“In terms of approach, it’s always about trying to capture the feeling of being at the show while also giving the viewer a variety of angles, to show them things they couldn’t normally experience.” 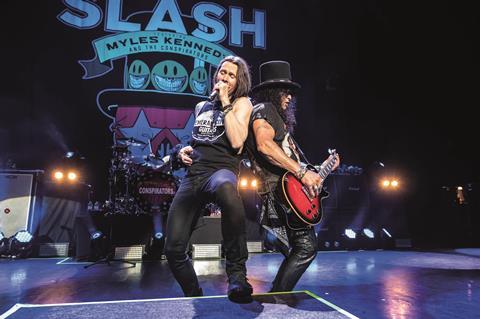 Parsons is the producer and director of Eagle Rock’s Slash Featuring Myles Kennedy And The Conspirators – Living The Dream Tour. The show was filmed at London’s Hammersmith Apollo in February and mastered in UHD HDR, and will be released this month (September) on a variety of formats.

“Eagle Rock asked me to pitch how I would like to film the show,” recalls Parsons. “I came up with a camera plan that gave me as much flexibility and variety as possible within the financial parameters.

Slash and his management were happy with the treatment. “The band’s crew were involved in signing off camera positions, as they didn’t want cameras interfering with the band’s performance. Luckily that tallied with my approach in capturing the show without impacting on it,” says Parsons. 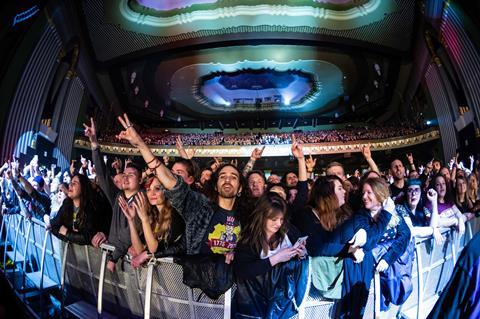 “I had two close-up cameras at front of house [FoH], one mostly following Slash, one on Myles; a short track at FoH to give a moving wide; two handheld cameras in the pit at the downstage edge; a Towercam and two handhelds onstage; a hothead on the front of the balcony; and a camera at house right to cover Slash’s guitar playing.

“I didn’t do a live cut as we were going to an edit, so the 10 main cameras came back to a small OB truck so I could see them and talk to the operators. The way I approached this shoot was to give the cameras notes on their main focus, song by song.

“Rather than dictate shots, I let them show me what was happening within their frames. Then it’s a case of making sure there is enough variety in framing and movement to create a great cut in the edit.”

Parsons deployed Arri Amira and Alexa Minis as the main cameras on the shoot, which were all provided by Procam. “Arri cameras capture a warm and organic image,” says Parsons.

“I also had two Red cameras in the audience on prime lenses, providing a little more vibe and dirty [footage]. The handheld operators – James Tonkin and James Miller – are both people I’ve worked with a lot. I don’t see their pictures as they are in among the audience, but they are masters at finding the angles and shooting beautifully while in the midst of the madness.”

The band’s lighting designer Deuce worked with DoP Nick Wheeler to balance the lighting for camera. “It’s a case of prioritising what needs to be altered, because by the time the show is loaded in, it’s around 2pm before we can start to work on lighting,” says Parsons.

“Follow spot levels and colour intensities are the priority. Making the band look great is a given – making sure the colour palette doesn’t overpower the cameras or the artist.” The concert was shot in 4K UHD and at 23.98fps.

“This gives the pictures the filmic look that we all love. It’s also the best option when it comes to converting to other frame rates and resolutions for the various deliverables,” says Parsons. “All we had to worry about was a possible 50Hz flicker from the lights.”

“I wanted energy from the cut and to show the musicality and camaraderie. Tight and percussive, but not sterile or dull”
Ben Wainwright-Pearce

Aside from the camera operators, all the technical team were from Procam and Red TX, which was responsible for recording and mixing the audio for the film.

“Tim [Summerhayes] and Ollie [Nesham] and the Red TX team are the go-to people for live audio,” says Parsons. “They took a split from the band’s monitor desk and added a couple of extra microphones to Slash’s cabinets to make sure we had it totally covered. Recording in 48K 16bit, they also added audience microphones around the venue for the 5.1 mix.

“The engineering racks and camera controls were a fly kit that we squeezed into the loading dock of the venue. Camera feeds ran to them and then onto the OB truck. The UHD media was mostly recorded in camera, aside from the inaccessible hot head that was recorded in the engineering racks. Audio and video sync were jammed from the OB to the audio truck.”

“The audio mix went well,” adds Parsons. “The [team] know the room, and the band’s production manager, Quake, also does FoH audio. We did a first pass and sent it to the band for notes. Myles and Slash came back with some minor changes, but they wanted to keep it real and live, so there were no overdubs, just tweaks to the mix and it was signed off.”

Parsons then worked with Ben Wainwright-Pearce, who did the creative edit, briefing him on the pace and flow of the cut.

“I wanted energy from the cut and to show the musicality and the camaraderie,” he says. “Tight and percussive, but not sterile or dull.

“Once the cut was signed off, we moved to Igloo Post where Malcolm Ellison did the colouring. Again, the brief here was to keep it feeling real, so we went for a natural look but made sure the colours popped and the band looked great. We graded in HDR, which looks amazing.”

“Our first job when working on a project like this is establishing all of the required deliverables, as usually there are a range of them, and these have a huge impact on our workflow,” says Ellison, colourist and online editor at Igloo Post. 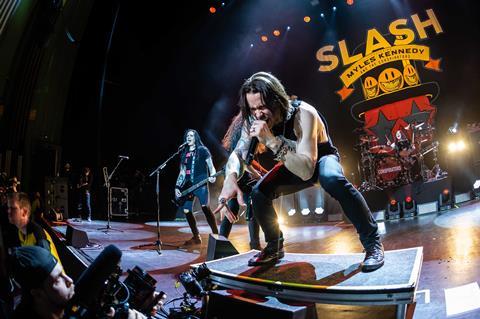 “The main team on this project included me, Igloo managing director Brian Ainsworth and Louise Ainsworth, the assistant online editor. “We worked closely with Jim on the grade and online process, including reviewing all the other colour space deliverable formats.

This was an excellent collaborative process as it gave me the opportunity to provide my own thoughts and ideas about the grade, as well as making sure the grade had the look that Jim set. We then worked with the rest of the Eagle Rock team to deliver the project.”

Igloo has a long-standing relationship with both Jim Parsons and Eagle Rock, working on many of the latter’s high-end music productions, including the 4K Black Sabbath film and feature documentary The End Of The End. 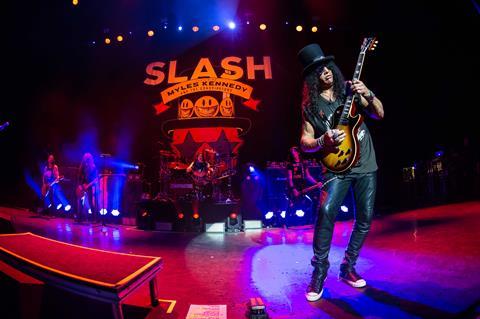 The Slash film was graded in HDR-10 at Igloo and was set for a peak brightness of 1,000 nits. “Unlike a drama production, the projects are lit heavily for the audience at the gig and this can cause issues when grading. For example, the way the lighting reacts with one camera may not have the same effect on another,” says Ellison.

While the DoP balanced the cameras at the beginning of the shoot, the lighting changes dramatically.

“Balancing is key,” he stresses. “Because certain shots, usually the drum shots or remote static cameras, differ in colour from the rest of the cameras, they have to be balanced in. While it’s still a captured live show, we want to give it our own look and more of a filmic style. As such, we spent a day with Jim setting the look for the whole show and also on a song-by-song basis.”

The main grading and online suite at Igloo is based around the Grass Valley Rio – which enables playback of 4K and 8K files in real-time – a 4K HDR monitor from Canon and the Omnitek Ultra XR for HDR analysis, while the storage is fibre-based and also provided by Grass Valley.

“We received ProRes files as rushes,” says Ellison. “These were transferred into the system, which converts everything to DPX/EXR sequences ready for HDR grading.

Because of the power and ability of the Rio, the whole project could be completed within this system, meaning that we could tweak the grade, credits and online at the last minute if required. This also meant that when we did the transform to Rec 709, everything was still adjustable and could be altered to provide a great picture.”

Ellison says it’s important to not go over the top with HDR just because it is possible to do so.

“However, HDR does seem to work perfectly for a live music project. It gives an effect of being part of the audience and more of a sense of depth to the film. It provides a greater representation of colour to show off the nuances of light and shade provided by the show’s lighting director.”