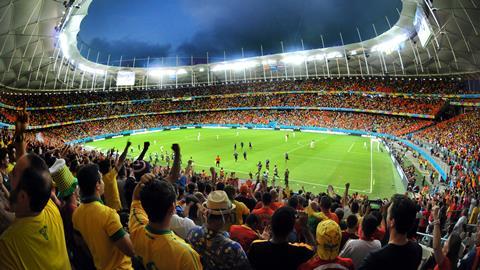 Tech innovation will be at the fore at this year’s World Cup as all 64 matches are captured in 4K UHD and HDR, and more cameras than ever cover the action. Immersive sound, 180-degree live streams and VR content are also in the match-day programme

Fifa’s TV division and Paris-based Host Broadcasting Services (HBS) have pulled out all the stops for the production of the World Cup 2018 in Russia.

The chief innovation is the broadcast of all 64 matches in UHD and HDR, a decision that necessitates a complex wrangling of data in the OB van to produce multiple deliverables.

These include UHD HDR and a pair of HD signals (1080p 50 and 1080i 50) to satisfy the bulk of international transmission.

Broadcasters taking the UHD feed include Sky Deutschland, which will show 25 live games in the format. With a remit to cater for all rights holders, Fifa TV’s watchwords are consistency and impartiality, all the while “keeping a balance between the different production styles used across the world”.

The UHD HDR and HD SDR set-up is being accomplished as part of a single production chain. The UHD feed itself will be produced within the traditional arrangement, in which each 4K camera feed is split into four HD SDI channels for ease of routing around outside broadcast trucks that have yet to make the switch to IP.

Likewise, the matching of all cameras, including for UHD HDR, will be made with the HD production as a reference.

This basic match-day coverage is supplemented by eight super-slow-mo cameras, a cable cam and the Cineflex Helicam. Two ultra-motion polecams join the roster from the quarter-final stages. In addition, two RF cams will be added at each venue, focusing on fan coverage in and outside the ground.

Around 75% of the live match cut is estimated to be in full UHD HDR, with the remainder up-converted. All replays, for example, will be up-converted from HD “with minimal visual impact on the UHD feed due to the natural softness derived from the slowmotion angle”, advises Fifa.

Viewers of each format will see slightly different coverage. The main UHD camera in a central pitch mid-height position will be framed wider than the regular HD main shot and automatically substituted on the UHD HDR feed every time the coverage cuts to the main HD position.

“The UHD shot is too wide for the HD feed, distancing the viewer from the story,” says Fifa. Aside from more picture detail, the wider frame of the UHD camera will offer a “new view of team tactics and options within the match”.

There is an interesting extrapolation here to 8K live event broadcasts, which will no doubt be part of the mix in Qatar 2022. The 8K sports experiments to date, including at the World Cup, have tended to train a wide-angled camera on the pitch with minimal intervention by a director – so great is the panoramic detail on display.

HBS is fielding eight crews, which will each travel between three venues and provide the host feed. This is supplemented by 32 Fifa TV crews, assigned to cover the activities of each team and to generate related colour from the 11 host cities.

As a guide, in Brazil, HBS generated 5,000 hours of content during the tournament, including training ground footage.

The production and flow of content is managed from the international broadcast centre (IBC) in Moscow, a facility that houses a satellite farm, studios and broadcasters’ production teams.

Video Assistant Refereeing (VAR) is another first-time feature of the tournament. This will be operated remotely at the IBC with VARs in direct contact with officials at the game. VARs watch the match in a video ops room with access to all host feeds plus goal-line tech.

HBS will explain the VAR process to viewers as a picture in picture and “eliminate any confusion that can arise with the more complex referrals using replays and graphics”.

UHD viewers also benefit from 16-channel audio (with embedded 5.1 bed), although the final mix depends on the configuration of the consumer’s speaker and TV.

The object-based audio makes use of microphones ringed around each pitch and software that tracks each player and the ball.

The software takes into account various parameters such as the polar pattern of the mics, their distance from the ball, or whether the mics are static or moving with the camera.

According to Fifa, the software is also capable of analysing the situation on the pitch to create more than one point of interest in the event that, for example, multiple players are congregating in one spot, such as when arguing with the referee.

The entirety of contribution relies on a 100Gbps redundant optical fibre network connecting each venue to the IBC, provided by the Russian government. Onward transmission by satellite is the responsibility of Eurovision Media Services, which delivers back to Points of Presence in London, Paris, Frankfurt and New York.

Only limited use of unilateral cameras is permitted during live play by Fifa, so ITV and the BBC will primarily augment their presentation pre-match, at half-time and post-match.

While in competition for viewers, ITV and the BBC will be sharing facilities more than at any other recent World Cup. This saves money and is said to make transmission more resilient.

For example, the broadcasters will share SNG (satellite news gathering) facilities and a studio in Red Square, with related shared router and talkback connections to their teams in the IBC.

After dabbling in virtual reality in Brazil, Fifa has gone a step further to produce live streams in 180 degrees of all matches, available via a World Cup app on platforms like Samsung Gear, and on Facebook and YouTube.

Not quite VR, perhaps, but at least a panoramic presentation and one that can be made more immersive by viewing over VR headgear like a PlayStation VR or Google Daydream.

Three streams will be taken from dedicated UHD cameras positioned behind either goal and in the main stand, with wide-angle lenses covering 160-180 degrees.

Separate 360-degree VR will be recorded as clips rather than full matches. One such rig will be in the tunnel surrounded by the players; another in the stand for a viewing experience surrounded by fans.

Fifa has been unusually restrictive in permitting any third-party supplier to talk about the World Cup. But we know that Sony is providing the bulk of kit for the UHD HDR and HD coverage; EVS is supplying its usual nearline server array and replay systems; and Deltatre is believed to be behind the VR experience.