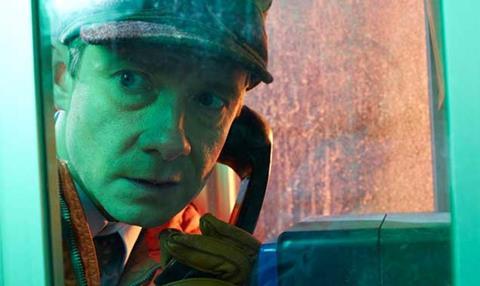 “What could have been a disaster, enraging Fargo aficionados, is a respectful homage, and should quench a thirst they had half forgotten they have. What it doesn’t have, of course, is originality. Not just because of Fargo 1.0, but also the Coens’ more recent stuff (there’s something of the Javier Bardem character from No Country for Old Men in Thornton’s hitman), and all the other post-Fargo television that has delved into the murkier reaches of the human mind, from The Sopranos to Breaking Bad.”
Sam Wollaston, The Guardian

“As a TV series, Fargo has the burden of living up to the beloved 1996 Coen brothers’ film of the same name. It bears it lightly, despite honouring its atmosphere of transgressive weird, and including the odd allusion (this time it is the male cop expecting a child). There is a new plot, cast, writer and director. Put the movie out of your mind. Enjoy some must-watch TV.”
Andrew Billen, The Times

“Fans of the original will have found much to reassure them. It’s set once more in the glumly snow-capped small-towns of Minnesota. Allison Tolman’s keen-as-mustard cop, slowly revealed to be the show’s beacon of humanity…Bold, weird and gory.”
Ben Lawrence, The Telegraph

“It was a performance that piled impossibility upon impossibility. Pitch-perfect reproductions of Cooper’s acts were made funny in their own right. Then he was funny in the bits in between and charming, so you could see why Dove and Mary loved him, and love him for so long. It was a towering achievement, and Threlfall made it all look as effortless as Cooper did himself. Just like that.”
Lucy Mangan, The Guardian

“Made a perfect start when it had the gangling, gape-mouthed comic on holiday in an Egyptian bazaar, buying a maroon fez — his trademark headgear — from an Arab vendor who was doing an abysmal Tommy Cooper impression. Within moments it was plain that this two-hour drama would be superlative TV, because the one man not impersonating Cooper was the actor playing him, David Threlfall.”
Christopher Stevens, Daily Mail

“Take one headstrong heroine, add a boggy moorful of secrets, a spot of horse thievery, a devilishly attractive uncle-in-law, gorse-to-gorsebush bedragglement, a dash of murder, an unseen overlord and you’re away. It’s Thomas Hardy meets Cold Comfort Farm and I’m not moving til it’s over.”
Lucy Mangan, The Guardian

All About Two, BBC2

“BBC Two has made plenty of that but has reached a funny age and for its 50th birthday last night chose to host a pub quiz all about itself. Any tribute that shows just three seconds from The Forsyte Saga, and claims CBeebies’ In The Night Garden as part of its history, has its deficiencies, but some of the clips were new to me.”
Andrew Billen, The Times