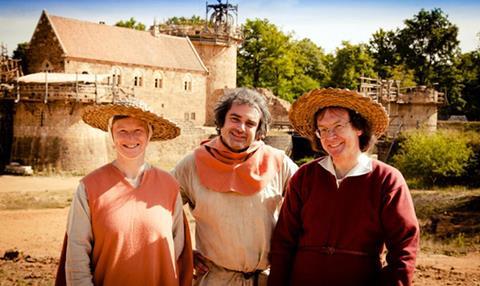 Secrets of the Castle, BBC2

“Sometimes, Secrets of the Castle is like being cornered at a party by a medieval history bore. Anyone who listened attentively to Pete’s detailed explanation of the different types of sandstone, for instance, deserves an honorary geology degree—but the re-creation approach to history still reliably uncovers imagination firing details.”
Ellen E Jones, The Independent

“Secrets Of The Castle is interesting; I’m not completely convinced it’s five-episodes interesting, unless you’re a total medieval freak, but next week they’re looking at war and weaponry, so that should be good. Phwoar, arrows, crossbows and giant catapults called trebuchets. Ruth, I imagine, will be at home doing the laundry, scrubbing at the stains with a scratchy, old pig’s scrotum.”
Sam Wollaston, The Guardian

“Perhaps the acting shone through brighter this week because the story was a bit quicker.”
Matt Baylis, Daily Express

“Overall, in terms of beautifully crafted storytelling and big emotional impact, The Missing delivers far more than most.”
Gerard O’Donovan, The Telegraph

“In truth, many of the stories of these so-called ‘hidden’ villages are familiar in this way, but Penelope’s pleasingly Margo-like manner still has the power to ennoble otherwise unremarkable scenes of rural life.”
Ellen E Jones, The Independent