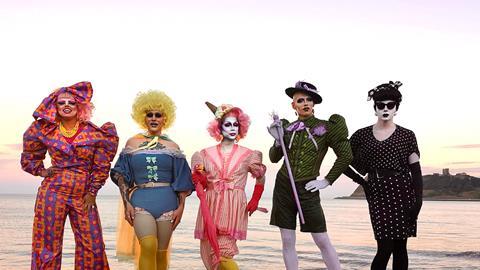 “When times are tough, we switch on TV to be entertained, and this has that entertainment value”

If you take the drag from Ru Paul’s Drag Race and the male makeover from Queer Eye, you may have something close to new format Drag Lab.

This could prove to be a winning draw for international buyers, tapping as it does into a burgeoning and popular niche of programming that challenges prescribed ideas of masculinity and gender.

Summer Films’ series is currently in the edit ahead of delivery to Channel 4 in April, with distributor Hat Trick International bringing it to buyers for the first time in Cannes.

Drag Lab is billed as an outrageous yet emotional series centring on UK drag collective The Family Gorgeous.

Founded by the eye-catchingly named Cheddar Gorgeous and Anna Phylactic, the group are based in Manchester, where they host a monthly ‘Cha Cha Boudoir’, teaching unconfident and uncertain guests how to dress up, apply makeup and unleash their inner diva.

Drag Lab takes The Family Gorgeous on the road – touring Britain in a flamboyant glitter bus to unearth a new side to unreconstructed men, downtrodden women or anxious teenagers.

In their new guise, those taking part must then perform live in front of family, friends and locals from their town to showcase their remarkable transformation.

Hat Trick director of sales Sarah Tong describes the series as fun and uplifting, as well as lifechanging for those involved. “At a time when the world is broken, divided and uncertain, what better tonic than Family Gorgeous,” says Tong.

“When times are tough, we switch on TV to be entertained, and this has that entertainment value.”

Hat Trick got involved in the series through its first-look deal with Sam Whittaker and Lucy Hillman’s Summer Films. Tong says the series is available both as a finished tape and as a format: “It will depend territory to territory. Some will want to buy finished, some might do both.”

Drag Lab is very formatted, so is suitable for adaptation. In each episode, The Family Gorgeous travel to a new location, carry out their makeovers and then get their participants to take part in lip-sync performances in front of family and friends. Viewers get to see the personal journey of those who take part.

“It’s quite lifechanging – it really gives hope to them,” says Tong.

Hat Trick is targeting linear and digital broadcasters, but Tong thinks Drag Lab is likely to be more popular with the former, given that streamers seem more geared towards drama.

In terms of audience, she says it is not aimed solely at younger viewers and could appeal quite broadly. However, she acknowledges that drag is not a subject matter that crosses over easily to all territories: “In some territories, it is quite tricky to show men in drag.”

But, she stresses, Drag Lab is “not an outrageous show”. Specifically, Tong hopes the series will find homes in Australasia, Europe and the US.