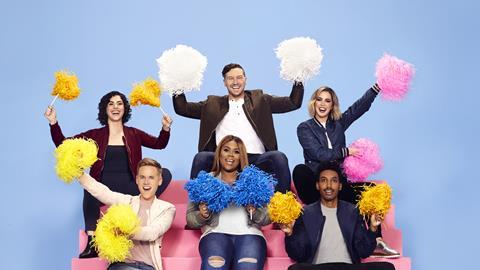 “There are lots of dating shows, but none that has Dating No Filter’s kind of hybrid comedic approach”

Each episode is based around two blind-dating couples, whose every move is being watched by three pairs of comedians, who review every move and offer an entertaining play-by-play commentary on all the awkward inter actions or heart-warming moments as the date progresses.

Visually, the show is akin to a faster-paced, more animated Gogglebox, from producer Lime Pictures’ All3Media stablemate Studio Lambert, with the comedians watching the action from the comfort of a couch.

Langenberg says: “It will work well as a format because it’s a new variation on dating. There are lots of dating shows on the market, but none that has Dating No Filter’s hybrid comedic approach. It’s the kind of show that could work well for a wide range of broadcasters.”

The humour quotient in the show is raised by choosing larger-than- life characters who provide rich material for the comedians.

Further humour comes from the quirky and unusual nature of the dates. “There is an ice-skating date in one of the US episodes in which one person is an expert and the other has never skated,” adds Langenberg.

“You also get a lot of comedy from the fact that these are first dates, so you’re going to get situations where the couples really aren’t right for each other.”

In theory, broadcasters could acquire the show and overlay local comedians on the pre-produced US dates (thus making it purely a studio-based investment), but Langenberg doesn’t see this as the way forward.

“The US version could sell as a completed show. But for buyers going down the format route, the strength is in local comedians commenting on dates that are culturally relevant, either because of the characters or the locations.”