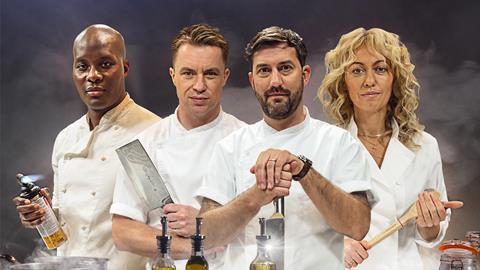 In this competition format, amateur cooks go head-to-head with a professional chef to win cash prizes rising from a few hundred pounds to a jackpot of £10,000 (in the UK).

In the UK version, which launches on Channel 4 in May, the four pros to beat are Michelin-starred Mark Sargeant, celebrity favourite Clodagh Mckenna, TV regular James Tanner and Roux Scholar Frederick Forster.

If you’re wondering why the world needs another cooking show, Twofour Group director of programmes Dan Adamson has his response primed: “If this were simply a cooking show, we wouldn’t have bothered. But what sets it apart is that it marries the jeopardy of a cooking competition with the drama of a money ladder.

“Our view is that this is more like The Chase than MasterChef, though you do get the added bonus that there will be some great cooking on display.”

Contestants compete against a house chef in up to five fast-paced cook-offs. While the rules vary for each round, the basic idea is that the amateur has to produce a better dish than the pro to win. This is decided by a jury of five foodies, whose votes are worth cash.

“These are members of the public who like food but aren’t reverential towards our chefs,” says series producer/director Colin May. “The odds are not all stacked in the chefs’ favour.”

Cash prizes start at £100 per vote in the first round and get higher with each cook knocked out. However, the catch is that each amateur has to risk their previously accumulated winnings to take part in each new round, meaning they could go home with their honour intact and some money after one round, or gamble in pursuit of the ultimate prize.

To win the latter, says May, “they would need to recreate the chef ’s signature dish – and get the jury’s votes”.

According to Adamson, there is no must-have gameshow-style set so the format is easily adaptable. C4’s plan is to strip it from Monday to Friday at 5pm.

A risk with such a show is that the gameshow grammar could be spot on but the practical cooking elements could leave a bad taste in the mouth. Twofour addressed this by bringing in MasterChef alumni Antonia Lloyd as series editor.

“She had a meticulous understanding of what you could cook and how long it takes,” explains May.