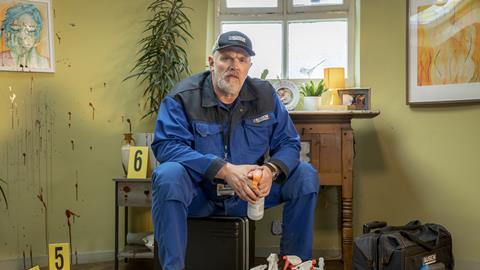 The Cleaner has had an unconventional route to BBC1 primetime. In what is a rare move for UK broadcasting, the half-hour series is based on a long-running German comedy – Der Tatortreiniger (Crime Scene Cleaner) – which is produced by the Studio Hamburg Production Group.

A dark comedy, which debuted on BBC1 in September, The Cleaner follows Paul ‘Wicky’ Wickstead, a gossipy crime-scene cleaner who is responsible for the removal of any signs of death at the scene of a crime. The series is written by and stars Greg Davies, best known for his roles in The Inbetweeners, Cuckoo and Man Down, and as the host of comedy panel show Taskmaster.

One of the show’s biggest draws is the starry supporting cast, with each standalone episode presenting a new case, allowing Davies to explore a range of topics. Helena Bonham-Carter appears in the first of the six episodes – playing a widow who murders her husband after growing tired of his control-freak ways.

Peep Show and Upstart Crow’s David Mitchell stars in another episode as a pedantic and frustrated author, while Bad Education’s Layton Williams plays a self-interested influencer. Other guests include Stephanie Cole (Still Open All Hours), Ruth Madeley (Years And Years) and Jo Hartley (After Life).

Studio Hamburg UK pitched the idea for a British remake to the BBC. Davies was top of their list to play Wicky, so then-BBC director of comedy Shane Allen made an introduction. To the creative team’s surprise, Davies said he wanted to write the series as well.

BBC Studios director of comedy Jonathan Blyth says the combination of the series’ “distinctive and buzzy premise” and Davies at the helm sets The Cleaner apart – and he thinks it has global appeal.

“The cast is a dream and each episode has something new and distinctive to offer,” says Blyth. “We’re seeing more and more new buyers for comedy and this feels like a show that can harness that appeal.”

He notes that the original series was broadcast on linear for several years and is now a most-watched title on Netflix in Germany. “It has enough scale and is accessible for linear scheduling, but also with its distinctive tone, it has appeal for VoD,” he says.

BBCS is distributing The Cleaner globally, except for German-language markets.