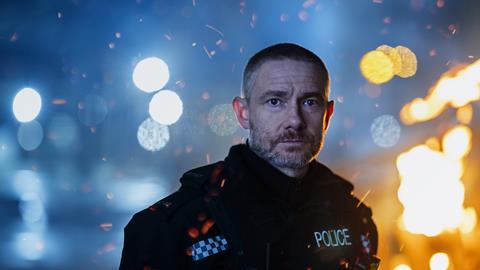 ‘It’s the kind of bold, edgy, colourful series that could play on a range of platforms, so we are considering our options’

Fremantle’s six-part crime thriller The Responder has numerous elements that point to it being a major hit for the BBC.

First up, it stars Martin Freeman, the much-loved actor who was core to the success of BBC limited series Sherlock. Next is production outfit Dancing Ledge Productions, which scored a hit last year with true-crime series The Salisbury Poisonings.

Then there is the scriptwriter, says Rebecca Dundon, vice-president of scripted content at Fremantle. “The Responder is the debut series by Tony Schumacher, a former policeman,” she says. “Inspired by his experiences, he has created a bold story with authentic characters and voice.”

The series follows Chris (Freeman), an urgent-response police officer working night shifts in Liverpool. With each episode representing a single shift, audiences get to experience first-hand the challenges facing frontline law enforcement. “But that is only one strand of the story,” Dundon adds. “Confronted by personal issues such as poor mental health and a struggling marriage, Chris is barely managing to keep his head above water. To make matters worse, he is given a new rookie partner [Timewasters’ Adelayo Adedayo].”

With a minority stake in Dancing Ledge, Fremantle has been aware of the project almost from day one, says Dundon, while its crime thriller and character-driven narrative makes The Responder “unlike anything else on the global market”. He adds: “It has jeopardy, action and the fight for survival all in one show. Its distinctiveness will appeal to an international audience.”

All these factors play into the marketing pitch, with Peaky Blinders and The Terror director Tim Mielants another key selling point.

Dundon says no deals have been done yet, but she expects the show to attract attention: “It’s the kind of bold, edgy, colourful series that could play on a range of platforms, so we are considering our options.”

Another factor that could give the show an edge is that it is set in Liverpool, the home of the Beatles and two well-known football teams.

While the city is no stranger to production, it is typically deployed as a double for other locations. “This is a show where Liverpool is almost like an extra character,” says Dundon. “The production team take the opportunity to present the city in a way most viewers won’t have seen.”