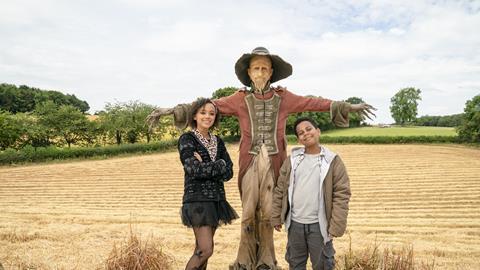 ‘This is updated for the modern day, with some relevant messaging, and has a strong cast and crew’

The reboot of the classic British series Worzel Gummidge should not automatically be considered a pure-play kids’ show, despite being based on Barbara Euphan Todd’s children’s books. Pirates Of The Caribbean actor Mackenzie Crook writes, directs and stars as the titular scarecrow in BBC1’s reimagining of the tales, told across two hour-long films.

“This is a two-part family special with BBC1 credentials, with the hope and plan that if they work, it will develop into a series targeted more at a family co-viewing slot on a Saturday evening,” he says.

Ford says KMD was moved to acquire distribution rights to the show after several buyers expressed a belief that there is “a big gap in family, co-viewing programming”.

Produced by Argonon Group-owned Leopard Pictures, Crook’s outfit Treasure Trove Productions, Lola Entertainment and Pigeon Entertainment, the specials return to the village of Scatterbrook and the introduction of two young people to Worzel, the scarecrow of Ten Acre Field.

Their world is sent spinning when Gummidge comes to life, with the only person more shocked being Worzel himself, when he discovers that the children are not in fact fellow scarecrows but humans.

“This is a brand franchise that is recognised in some places, based on popular books,” says Ford. “It’s updated for the modern day, with relevant messaging, and has a very strong cast and crew.”

Ford says that with the forthcoming launch of new SVoD platforms, some of which are aimed at families, Worzel Gummidge will find its place globally.

He points to the family focus of Disney+ and notes that HBO Max is on the hunt for family-themed programmes, while Netflix and Amazon have been significant buyers of such content for some time, even with their focus on original content.

“Then there are all the individual free-TV and pay-TV broadcasters who cater for the family,” adds Ford. “If it’s a good piece of entertainment with messaging and storylines that people can associate with, it will do well.”

The Gummidge character has not been adapted for TV since Worzel Gummidge Down Under, which Channel 4 and New Zealand’s TVNZ (then Television New Zealand) coproduced for two years between 1987 and 1989. That series, in turn, followed on from the ITV kids’ show, which aired in the late 1970s and early 1980s.

KMD has already seen “interest from multiple territories”, including both English-language and non-English-language buyers. Ford is also encouraged that there has been a positive response within Europe, North America and Asia in the short time since his company introduced the series to market.

With buyers from those regions “expressing a desire to see more” of the show, KMD will be giving interested parties an opportunity to screen it before it decides on a distribution route.

“Public broadcasters that still have a family remit will be interested,” says Ford. “It could play tea-time slots during the week, or on a Saturday.”

Although budgets are not forthcoming, Ford stresses that all parties made a “good investment to create a high-quality production”.

With high hopes that the specials will be the catalyst for further series, the distributor is committed to the show.

“We have invested in Worzel Gummidge and we would look to continue to do so,” adds Ford.