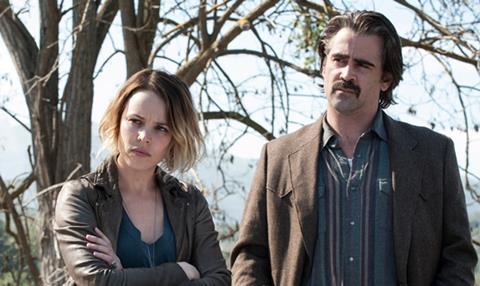 “Whether or not this heady concoction appeals to you will largely depend on your willingness to join Nic Pizzolatto’s cast of broken individuals on the road to hell and how you feel about sifting key plot-points from the mumblings of whisky-fuelled men in ill-lit bars. Personally, on the basis of this absorbing opener, I’m all in.”
Benjamin Secher, The Telegraph

“Despite all that is different, this second season immediately feels of a piece with the first. The nihilistic philosophising will be done mostly by mobster-turned legitimate businessman Frank Semyon (Vince Vaughn), while highway patrolman Paul Woodrugh (Taylor Kitsch) has taken on Marty’s difficult relationships with women. It’s early days, but one success Pizzolatto can certainly claim is consistency of tone.”
Ellen E Jones, The Independent

“From Leonard Cohen’s granite voice on the stylish opening credits to the cameras gliding with all the threat of a drone above LA’s freeways, it’s clear that it’s a show that wants to be taken very seriously. There’s a freeway sign for ‘Mulholland Drive’ at one point, but this feels closer to the over-boiled noir of Frank Miller’s Sin City than any of David Lynch’s intense surrealism.”
Richard Vine, The Guardian

“It is all very different from the first season of True Detective and, I am glad to report, it is all very much the same.”
Andrew Billen, The Times

“Constables Tim and Steph cruised around south London in their panda car, snacking on junk food and shooting the breeze. Their double act provided some much needed lightness in an otherwise dispiriting hour of senseless brutality.”
Ellen E Jones, The Independent

“Far from being command-barking robots in hi-vis, the officers in this come across as human and humane, often sharing frank insights on camera.”
Matt Baylis, Daily Express

“The most fascinating aspect of all this wasn’t the family’s junk-built mega home, or the semi Mowgli children clambering barefoot about the roof beams, but the central question of just why two urban dwellers would choose to up sticks and raise their children in a patch of rainforest where the chickens get snatched by enormous snakes, the family dogs get picked off by jaguars and poachers lurk in the nearby jungle.”
Chris Bennion, The Independent

“Richard carried a gun but he and Alisa, their teenage son and their two young daughters were appallingly vulnerable. This was no ‘escape’ – it was blind folly.”
Christopher Stevens, Daily Mail