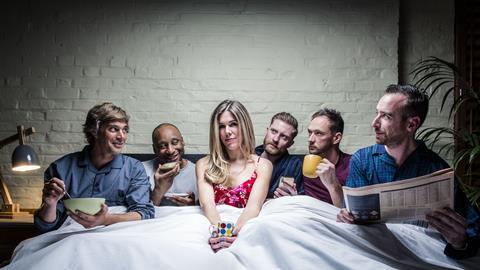 ‘The episodes I’ve seen have made me laugh out loud, but also given me a bit of a tear in my eye’

“I’ve been doing this job for 16 years now and I know we have a hit on our hands,” says Fremantle director of global entertainment development Rob Clark about Five Guys A Week.

The dating format is, he explains, “the simplest thing you will ever hear in your life”. One single girl invites five potential suitors to live with her for a week, all at the same time. Each day, she has to eliminate one of them, whittling them down to the last man standing.

Channel 4 originally ordered a pilot of the show from Label1 Television (The Hospital; The Job Interview) in 2018. Then, in May this year, the broadcaster greenlit a full 10-part series, which is yet to air.

Clark describes Five Guys A Week – which is not set on a desert island or in a beautiful villa, but in the girl’s own home – as a “completely and utterly authentic show” and a “real love story”. The girl chooses the five locally found suitors, who are all looking for love, from a list of 10 to 12 potential candidates.

Then the five guys ring on her doorbell, one after another in quick succession, and stay at her home, sleeping either in the spare room or on the sofa in the living room during the course of filming. They meet her parents and her friends – all the time striving to make an impression. A combination of fixed-rig and roaming cameras follow the action.

Clark says the show is comedic in parts and quite emotional. “The episodes I’ve seen have made me laugh out loud, but also given me a bit of a tear in my eye,” he adds. The elimination format drives the story on. “It’s like fast-forwarding the dating process,” says Clark.

This fuels the natural competitiveness of the men, and viewers get to see the success or otherwise of their various wooing techniques as they try to stand out from the crowd. Clark says this also creates “great bromances, as some of the guys living together really get on”, but the woman is in control throughout the process.

Fremantle, which owns a stake in Label1, has already sold the show to Dutch commercial network RTL4 and Clark predicts that “by the end of Mipcom”, the distributor will have “sold it in lots of places”.

For broadcasters, he pitches it as a format that is easy to schedule, highly promotable, not too expensive to make and one that could run as a standalone episode once a week or be stripped across several days or the entire week.

For viewers, Clark says that Five Guys A Week’s amusing, emotional stories are very digestible and should have broad appeal. “It’s really funny to see how the guys jostle to get the girl’s hand,” he adds. “It’s like trying to win a maiden’s hand at a jousting competition.”

Looking ahead, there’s also the possibility for the format to develop – to flip the genders or sexuality of the participants so that, for example, Five Guys becomes Five Girls.

That may well come in the future, says Clark, but for now, Fremantle is keen to see how the series plays out with a woman in charge. “If a dating show is going to work, it needs to be underpinned by one of two things: authenticity or humour,” says Clark. “This has both.”