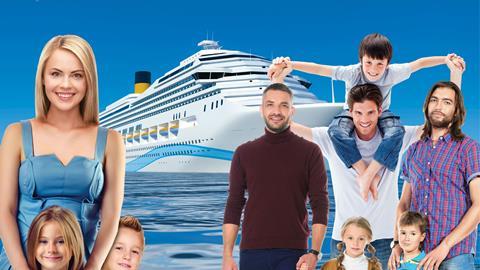 ‘This show addresses the fact that divorce isn’t the end of the world. It’s not a hook-up show, but it’s about finding true love’

Single Parents Cruising is a new addition to the dating genre that “shines a spotlight on a group of people that audiences don’t often get to see on TV”, says Armoza Formats head of sales Sharon Levi.

She’s referring to people who have exited a marriage or long-term relationship and want to find love again. “This show addresses the fact that divorce isn’t the end of the world,” adds Levi.

Originated by Canadian producer Zone 3, the show focuses on a single mum and a single dad who set off on a 10-day cruise in search of love.

Each protagonist is introduced to five suitors and the process is spiced up by various entertaining tasks “designed to reveal something about the participants’ character”, says Levi. Added to that, each parent takes their children along, so their final decision includes input from their kids.

Levi says the show is “respectful and tasteful” and doesn’t dwell on the negatives associated with broken marriages, describing it as “a positive show” about adults – mainly in their late 20s and early 30s – who are ready to move on from their break-up with support from their family.

“It’s not a hook-up show,” she adds. “It’s about finding true love, so the production team needs to be very sensitive in its casting.”

Another unique production element is that all the action occurs on a cruise ship. “It creates an exotic backdrop to the show,” says Levi.

Series one of the original Canadian version went to the Caribbean, with the second being shot in the Mediterranean. As such, the travelogue element can be scaled up or down. The travelogue component also means the length of the series could vary.

“There are a series of elimination rounds, which could be every week or every couple of weeks,” says Levi. “The Canadian version ran for 11 episodes, which is good in terms of amortising costs, but it could have been around six episodes.”

Ensuring that the kids are emotionally comfortable is a must. Levi suggests this means they should be communicative and aged nine or above.

But, she adds, the children are cushioned from the process to an extent, as the families do not leave the ship if they are eliminated and there are no format mechanics aimed at unsettling the contestants, such as ex-partners arriving unexpectedly.

Levi is convinced that the combination of people looking for new love and a cruise ship backdrop will prove universal.

“A lot of countries have similar stats on broken relationships, so this format centres on a scenario that audiences around the world will understand,” she says. “As for the cruise element, it is aspirational, and the fact you can change it each series is a way of sustaining audience interest.”

Levi says there are no particular special requirements involved in shooting on ships, “though it does perhaps call on the production crew to get more involved in the lives of the participants and life on board”.

She notes the team from the Canadian producer found themselves doing a little bit of everything, including some catering, but that besides mucking in, “the most important thing is that you need to get the right weather”.

Since the show aired in Canada, Armoza Formats has become part of ITV Studios, making it a stablemate of companies such as Talpa and Twofour.

In terms of how that might affect the show’s rollout, Levi says: “We already have a good network of contacts around the world, but it is exciting for us to be part of the ITV Studios family. One way it could make a difference is that ITV Studios has great production companies on the ground with which we could discuss adaptations.”