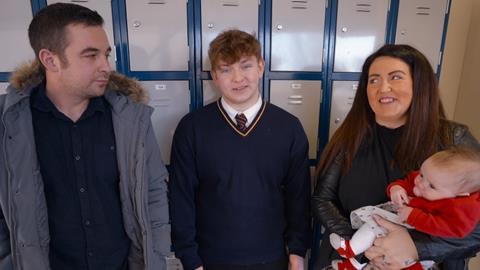 In Parents’ Evening, realities meet or – in some cases – collide as parent, teacher and pupil sit down to discuss the latter’s educational progress. Julian Curtis, co-founder of distributor Lineup Industries, likens the doc format to a soap opera or a short family sitcom, peppered with heart-warming moments, levity and emotion.

Each of the three episodes of the first series of Stellify Media’s original was filmed in a different school in Northern Ireland.

The show’s revelatory nature goes beyond the child-parent dynamic. The programme, by virtue of being embedded in a school, has things to say about the education system.

“It includes different types of schools – from private schools to tough state schools – but the stories remain similar,” says Curtis.

“Funnily enough, Stellify’s Tom Popay, who came up with the idea, didn’t have any children and was fed up with hearing these stories,” says fellow Lineup cofounder Ed Louwerse. “He wanted to know what all the fuss was about,” adds Curtis.

Parents’ Evening comes from Sony-backed Belfast indie Stellify, which has an international reputation after rebooting classic dating show format Blind Date for Viacom-owned Channel 5 and Who Wants To Be A Millionaire? for ITV, and for producing Netflix comedy gameshow Flinch!.

Netherlands-based Lineup was co-founded by former Sony execs Curtis and Louwerse and came to distribute the show as some of Sony’s smaller titles can need “a little bit more care and attention”, according to Curtis.

Asked how the series will translate internationally, Curtis points to the universal nature of parents’ evenings. “The dynamics are the same the world over,” he says.

The series started its second run on 30 September and has been bumped up to a primetime slot on BBC1 in Northern Ireland – from 10.30pm to 7.30pm – though it is only now making its Mipcom debut. It is this scheduling versatility that Curtis and Louwerse believe will help it sell in the international market.

Parents’ Evening has already been optioned in the Netherlands and there is a view to selling it across Europe, North America and Australia.

“What we’re finding is that a lot of factual entertainment formats are travelling,” says Curtis. “We would initially look to sell the format, but of course we will take each territory as it comes.”