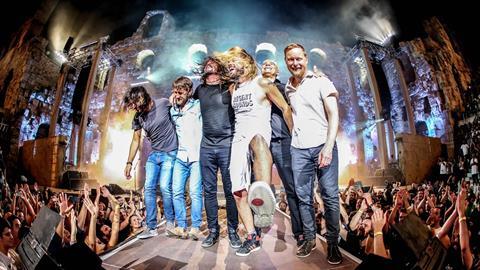 “We’ll be targeting all audiences. There is no specific place I think it won’t work”

The Foo Fighters playing the Acropolis in Athens is just one of the outlandish gigs that features in Landmarks Live In Concert.

Elsewhere in this seven-part series, Alicia Keys performs her anthem Empire State Of Mind from the deck of a cruise ship in front of the Statue of Liberty, while Italian tenor Andrea Bocelli plays at the Florence’s iconic town hall, the Palazzo Vecchio.

It’s all held together by Red Hot Chilli Peppers drummer Chad Smith, who accompanies the musicians around each location, teasing out personal stories from the artists as well as their favourite haunts.

Will.i.am and The Black Eyed Peas at London’s Royal Albert Hall, Kings Of Leon at the Beale Street Music Festival in Memphis, Prophets Of Rage at The Stone Pony in New Jersey and Brad Paisley at West Virginia University complete the line-up.

Broadcast on PBS at the end of 2017, Landmarks Live In Concert is now being represented worldwide outside the US by independent UK distributor Scorpion TV.

The series is produced by US-based City Drive Group, which specialises in live-music specials, docs and event programming. One of its recent credits is Intimissimi On Ice, a music and ice-skating event from Verona’s Roman amphitheatre.

Scorpion founder and managing director David Cornwall says he had been tracking Landmarks Live In Concert since he first heard about it, and approached City Drive Group about distributing the series.

“Our catalogue is alternative and commercial, which this is too,” says Cornwall. He adds that it is a difficult series to pigeonhole, combining as it does travel, culture and music.

“This is its own genre in many ways. It’s not a straight music show, nor a straight travel series,” he says.

“It’s unique in that sense – we’ve not got anything like it in our catalogue, and I don’t think anyone else has. And the fact that it is iconic bands playing in stunning locations means it kind of sells itself.”

A second series of Landmarks Live In Concert is now in the works and the ambitions for the locations are “huge”, says Cornwall.

Scorpion has already struck a number of deals for the series with airlines, including Emirates, Alitalia, Air France and Qantas.

Cornwall says he is also finalising deals with broadcasters in various territories – and not just specialist music channels.

He reckons it will appeal across the board, given the spread of musicians and locations, with Alicia Keys and Will.i.am drawing in younger audiences, the Foo Fighters bringing in slightly older viewers and Andrea Bocelli attracting more mature audiences.

“The key thing is its uniqueness – it really does stand out in the market,” says Cornwall.