2
Inside The Foreign Office 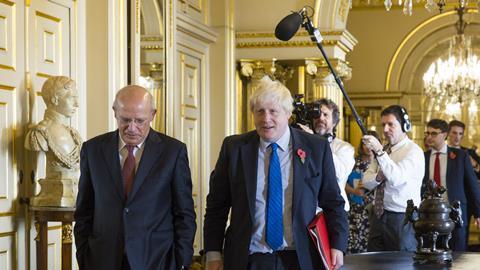 Inside The Foreign Office

“It’s not a PR job for the Foreign Office, but it’s not a hatchet job either. We examine how it all works without an agenda”

It took director Michael Waldman 18 months of negotiations to win access to The Foreign and Commonwealth Office (FCO) for this three-part documentary, which airs on BBC2 later this year.

Waldman has a raft of high-profile access documentaries to his name, such as Our Queen and Inside Dior. Notably, he won a Bafta for his engrossing fly-on-the-wall series The House.

A portrayal of a turbulent year in the life of the Royal Opera House, it didn’t make many of the organisation’s senior executives look good on camera.

It was partly for that reason that negotiations for this series were, in Waldman’s words, “extremely hard won”. But it was also because a lot of the workings of the Britain’s foreign ministry are (necessarily) confidential, making the FCO wary of opening up to the cameras.

That said, Waldman insists that the BBC retains full editorial control over the series.

Waldman has been filming over the past 12 months, a dramatic year in which Britain’s diplomats have been grappling with the twists and turns of Donald Trump’s presidency, the Skripal poisoning affair, crises in Syria and Myanmar and ongoing conflict in Ukraine.

Waldman’s lean production team (just him and a cameraman) has travelled the globe to make this film, shooting not only in the Foreign Office in London, but also during key sessions at the UN General Assembly in New York, as well as at the British embassies in cities such as Washington, Lagos, Ulaanbaatar, Kiev, Yangon (formerly Rangoon) and Baghdad.

Waldman had incredible access to ministers, including former foreign secretary Johnson, top civil servants and professional diplomats, teasing out information from smart and wary officials with an engaging, mischievous line of questioning.

Waldman describes the series as an authored doc that helps guide viewers through the workings of the FCO.

“It’s certainly not a PR job for the Foreign Office,” he says. “But it is not a hatchet job either. We examine how it all works without an agenda.”

However, the series is not only about high-level diplomacy – there’s compelling human drama too.

Inside The Foreign Office takes a close look at the work that embassies do, profiling some of the staff who deal with the thousands of Britons abroad who seek their help for all sorts of reasons, such as fleeing a forced marriage or winding up in a foreign jail.

One obvious question about a series like this seeking international buyers is: why would they be interested in something about the inner workings of a British government department?

Passion Distribution head of sales Nick Tanner says that while the documentary is about the British Foreign Office, it’s really about how countries pick up the phone and talk to each other to get things done. It’s about international diplomacy and how countries engage with the world, told through the lens of the FCO.

Tanner says the series taps into growing interest in the workings of government, citing BBC2’s acclaimed recent series American Justice. “There is a genuine appetite for this kind of documentary when told in an ambitious way.”

He says that such a “riveting, top-level and ambitious” series will appeal to free-to-air broadcasters, as well as SVoD platforms and big cable networks that want premium, authored TV shows.

Waldman, meanwhile, points out that another series about the workings of civil servants – the classic BBC sitcom Yes Minister – sold all over the world. “You could argue that this series is the real version of the comedy,” he says.