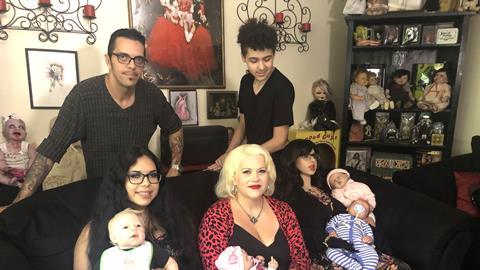 The families that producer Title Role has assembled for TCB Media Rights’ 6 x 60-minute series World’s Most Extraordinary Families are, as the title suggests, unconventional.

Each episode features three families from around the world who live their lives in a totally different way to most people. One family live off grid in the Arctic Circle, another settled on an island they bought near the coast of Cambodia, while a Texas family share their home with a 2,000lb bison.

One particularly eyecatching story follows a family with a transgender dad and daughter in the same household (mum has transitioned to dad, while the son is now a daughter).

Beyond the stories themselves, however, it’s the tone of the series that makes it stand out. Many shows that focus on ‘extraordinary’ people end up poking fun at their subjects, says TCB Media Rights commissioning editor Hannah Demidowicz. Not so this series. “This doesn’t have the tone of some shock doc series in this space,” she adds.

The show aims to reveal that the concept of family has never been more fluid. But the one common characteristic the families have is that they are all happy and proud of their lives. Demidowicz describes World’s Most Extraordinary Families as warm, insightful and inspiring.

“It celebrates the diversity of the modern world and the modern family,” she adds.

This ‘warmth’ was something TCB Rights was looking for right from the start. Unusually, the distributor has commissioned and fully funded the series itself, without a broadcast partner, in the belief that it will be of interest to the international market. Indeed, Demidowicz was hired specifi cally to develop and greenlight new shows for distribution.

The series is one of a number of glossy and globally focused shows that TCB has greenlit over the past year, confi rming its status as a ‘mini-commissioner’.

“We’re looking for ideas that have international appeal and fi t what our clients are looking for – celebratory, positive series,” explains Demidowicz.

She says that by developing and funding its own content, TCB is both in control of its own pipeline and “totally invested in the quality and success of our shows”.

In the past year, TCB Media Rights has greenlit approximately 50 hours of self-funded or cofunded projects and is aiming to double this over the next two years with producers around the world.

Manchester-based indie Title Role has a track record of working with TCB – it makes shows such as World’s Wildest Weather and British Airways: 100 Years In The Sky, both of which are repped by the distributor.

The Title Role production team has travelled widely, including in the US and the UK, on what Demidowicz calls a “fairly efficient budget” to make World’s Most Extraordinary Families, and will be delivering the completed series by the end of the year.

Some episodes will be finished in time for Mipcom and will be ready for screening at the market.

Demidowicz has high hopes for the series in Cannes, noting that it has been produced with broad appeal in mind, and not just for a female-skewing audience. “We’ll be looking mainly at sales to bigger commercial channels and their subsidiaries,” she says.

The UK, Australia, New Zealand, Scandinavia, Poland and Benelux are cited as the territories where it is likely to find interest from buyers.