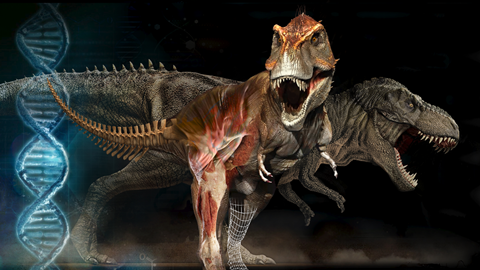 Shining a new light on the predator

Most of what we think we know about the most famous predator to ever walk the earth comes from Hollywood movies. This international co-pro aims to shine a new light on Trex, with high-end CGI and a bluechip spin.

The idea was born out of a conversation three years ago between TV presenter and naturalist Chris Packham and Talesmith Productions chief executive Martin Williams, whose producer and director credits include ambitious series such as Galapagos, Flying Monsters and David Attenborough’s Kingdom Of Plants.

“Chris had a boyhood obsession with the Trex and it had always been his ambition to make the definitive documentary, clearly based on what science tells us about the animal, using state-of-the-art animation techniques,” says Williams.

Commissioned by Diene Petterle and Tom McDonald from the BBC’s specialist factual and natural history division, the doc is billed as a ‘magical family special’ that takes viewers on a journey to unearth untold truths about the dinosaur. It culminates with the creation of an accurate, photoreal, fully animated CGI model.

Williams says putting the pieces together was a challenge because despite the dinosaur’s ubiquity in popular culture, fewer than 20 complete specimens have been unearthed.

The team found their perfect specimen, nicknamed Tristan, in Berlin’s Natural History Museum and used it as the prototype scan to gather 3D data.

To put flesh on the bones and work out how the animal would have moved and sounded, several experts in the field were interviewed.

Piece by piece, a truer picture of this prehistoric beast emerged. In Texas, we meet Glen J Kuban, a US computer programmer who employs photogrammetry using track prints to work out how the Trex moved and shows that the creature may not have been as nimble as the movies would have us believe.

“There came a point when they just got too big to move very fast,” says Williams.

In other scenes, an alligator jaw is used in experiments into the Trex’s bonesplitting capabilities.

The film reveals that the dinosaurs’ ferocity sowed the seeds of their destruction.

“Evidence suggests that a lot of Trexes were juvenile and not many survived into adulthood,” says Williams. “Once they reached sexual maturity, they became very territorial, which resulted in infighting among the bigger ones.”

The CGI assets were created at Montreal-based boutique Workshop. Meanwhile, Talesmith is seeking finance for a VR app to enable viewers to gain further insight into the dinosaur’s scale and movement.

Canadian producer and distributor Cineflix is a co-producer. Other backers include CBC and France Télé visions, which came on board as early presales.

The BBC version (to air on BBC2, with the makers hopeful for a Christmas slot) will be presented by Packham, while scientist and broadcaster David Suzuki will front the CBS edition.

A third international edition is being made for France Télévisions, which will air on France 5 without a presenter.

Cineflix Rights chief executive Chris Bonney says the show has broad appeal and he expects interest from the US, Australia, Scandinavia and Japan – which he says loves a good monster doc.