2
Hot Picks: Bear About the House 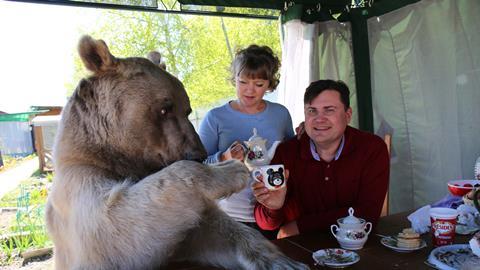 Hot Picks: Bear About the House

BEAR ABOUT THE HOUSE: LIVING WITH MY SUPERSIZED PET

Any show featuring a seven-foot tall, 55-stone Russian bear that lives with its owners is sure to cut through a cluttered EPG and Bear About The House is no exception.

The hour-long film, subtitled Living With My Supersized Pet, meets four families for whom owning a cat or dog is not enough.

Stepan, the bear that gives Barcroft Productions’ documentary its name, sits down for tea and cake with his owners Yuri and Svetlana, while Minnesota residents Mike and Valerie live with Cody, a one-tonne buffalo that showers in the local car wash and joins them for drinks at a bar.

Elsewhere, Vicki from Melbourne allows her nine-foot saltwater crocodile to sleep in her spare room, while New Yorker Larry has spent 30-years working with dangerous creatures, including a tiger once owned by Michael Jackson.

Karen Young, founder of distributor Orange Smarty, says the show goes beyond its “OMG moments” to offer real insight into the lives of the pets’ owners and their decision to co-habit with such difficult animals.

“While some do it for commercial reasons – to exhibit the animals – for others it is filling a void in their lives,” says Young. “Some are divorced or their children have left home. You are moved to tears because you feel the love they have for their animals.”

Young says that docs like this are increasingly rare as viewers become more aware of issues related to animal cruelty.

“It’s an EPG title jumper and will make people watch it. They think that they will be getting a shock-doc, but will come away having had a more emotionally invested experience.”

Following its UK debut on Channel 4 in a Monday 8pm slot, where it drew an audience of more than 400,000, Young is confident of securing deals with US, Australian and Russian broadcasters, due to the location of the supersized pets.

“The film does what it says on the tin and is supported by some great imagery
Karen Young, Orange Smarty

Beyond these territories, she plans to initially focus on other English-speaking countries, as well Scandinavian and Japanese broadcasters.

“I think it has a good chance because it’s a film that does what it says on the tin and is supported by some great imagery,” she says.

It is also the first deal struck between producer Barcroft and Orange Smarty after Young had earmarked the producer as a target.

“Barcroft is very good at putting this type of show together,” says Young. “While shows must stand out, it is just as important that they deliver with a good programme.”

Young also plays down the opportunity presented by the SVoD giants for single films of this scale. “There is so much hype around Amazon and Netflix, but for factual one-offs, the demand is not quite there. The linear channels are still where the money is,” she says.

The doc is part of an Orange Smarty catalogue that includes BBC3’s Kids Selling Drugs Online from Time Inc, in which Stacey Dooley explores Britain’s digital dealers, and True Vision’s C4 film The Wind In The Willows Murder.