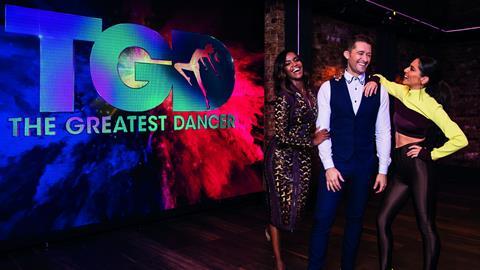 Fremantle’s big format launch at Mipcom is The Greatest Dancer, a new collaboration with Syco Entertainment.

The first version of the dance talent show is being produced by Fremantle label Thames for BBC1. No date has been set for launch but early 2019 seems likely.

Dancers (including troupes) perform in front of a mirror, as if in a dance studio. On the other side of the mirror is a studio audience watching them on a big screen. If 75% of the audience press a button to indicate that they like the dancer, the mirror opens and they are through to the next round – similar to The Voice’s spinning-chair mechanic.

Thames managing director Amelia Brown describes The Greatest Dancer as “a dance show for the people”, adding: “The amazing thing about dance is that it’s a language everyone can speak. It’s a way of bringing people together.”

Brown is reluctant to tempt fate by comparing the show to Fremantle’s juggernaut formats, but says it does seek to capture the same warmth and mass appeal as Got Talent.

“Ultimately, the final will be about dancing excellence, but along the way the audience will see dancers of all ages, from seven to 81, across a wide range of dancing styles, from ballet to jazz, hip hop and Bollywood,” says Brown.

“It’s unique that the studio audience decides who progresses to the live shows, so their fate is not decided by our dance captains.”

While the role of the dance captains is limited at first, they become more important later on as they pick who they want to mentor and take through to the live stage. The live shows are when the performers are really put through their paces, says Brown, by having to show they can perform in a range of different dance styles and scenarios.

Fremantle director of global entertainment Rob Clark says the show was designed as a companion piece to the BBC’s long-running hit Strictly Come Dancing and, as such, “is intended to have appeal to a broad audience”.

Clark says much of the appeal comes from the build-up to a performance: “The audition process starts with our receptionist eliciting information about the dancer. We learn what inspired them to dance and this creates an emotional bridge. It’s a show where the stories are as important as the performances.”

This element is similar in intent but different in design to Got Talent, he adds.

“Got Talent begins with people chatting about what they are going to perform, but dance is more solitary. Dancers might arrive with their coach or parents, but when they face the studio mirror, it’s a really intimate moment.”

Clark was at the production of early episodes and says the mirror reveal is impactful. “I’ve been to a lot of studio productions over the years and never seen an audience jump to its feet so instinctively,” he says. “It was a really uplifting experience.”

There is always a risk with handing the audience control that bona fide talent will be pushed aside by novelty acts like Honey G or Pudsey the Dog, but Clark says: “We worried a bit that the audience might just vote through every eight-year-old girl they saw, but they didn’t do that.

“At the same time, they aren’t going to vote for a dancer solely on technical merit if they don’t also connect with them emotionally. I’d say 90% of the time they got it right.”

In terms of international rollout, Clark says Mipcom is the major launch platform for the show: “A few partners have been over to see the show in production but no deals for the format have been done yet.”