3
Hot Picks: What Would Your Kid Do? 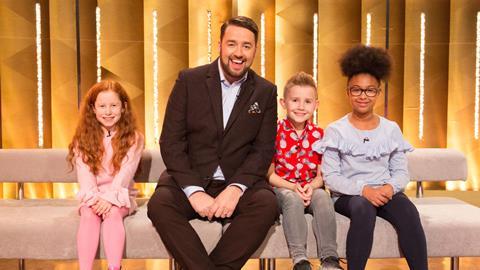 Hot Picks: What Would Your Kid Do?

Over the past couple of years, there has been a revival of interest in entertainment shows with young children as their central characters. One show that is riding this wave is What Would Your Kid Do?, which debuted on ITV in early 2018.

Produced by Cardiff-based Boomerang, part of Twofour Group, the show launched with 3.9 million viewers and an 18% share in a midweek slot, and has already been commissioned for a second series.

In the primetime family show, children aged five to seven are filmed in a school rigged with hidden cameras. The children think they’re taking part in classroom activities and games, unaware they are being tested for everything from empathy to lateral thinking, risk-taking and rule-breaking.

Back in the studio, a host (comedian Jason Manford in the UK) challenges the kids’ parents to predict what their child will do in each situation, providing a funny and surprising insight into their behaviour.

The family with the most correct predictions goes through to the final. However, the adults don’t choose which prize they will receive – the kids do. In one sequence, a young girl chooses a selection of fluffy unicorn soft toys rather than an all-expenses-paid holiday to Mexico.

Twofour Group chief executive Melanie Leach says: “There has been a resurgence in shows that centre on the funny things children do, but what makes this one distinctive is the pressure it puts on the parents.”

Particularly popular is the pay-off. “The prize selection pay-off was one of those game mechanics we had been thinking about for a while, and this was the perfect show to use it in,” adds Leach.

“The show has gone viral because of that. Its YouTube channel now has 175,000 subscribers and has generated around 35 million views since launch.”

The origin of the show was a piece of black-and-white video archive dug up by the development team at Boomerang. “It was a clip of a child answering a telephone that really made us laugh – it inspired us to try to develop something around children and their funny antics,” says Leach,

“As part of our development, we have been looking at subjects that traditionally sit in the factual arena and asking if there is a way of giving them an entertainment dimension.”

The show was soft-launched in spring and has already been snapped up by five territories, with negotiations for a US version ongoing. The first, 26 x 90-minute reversion started airing in Turkey in August. Next to launch will be a 21 x 60-minute version in Hungary.

Where the production giant isn’t present, the usual approach is to take the format to channels and work with their preferred supplier.

So what is the pitch to buyers? “It’s one of the few factual entertainment series to have really landed in the UK in the past year,” says Leach. “It’s got cross-generational appeal. It can also be delivered at a reasonable price point, so it’s affordable to a range of buyers.”

In terms of guidance to buyers, she says one key learning from the UK series “is having a host who is a parent”.

“Jason Manford has five children and that has really helped him connect with the kids in the show, and develop comedy based on his own experiences. Kids respond to him because he knows how to communicate at their level.”