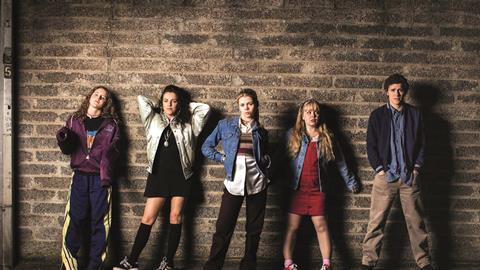 Comedy drama is set during The Troubles in Northern Ireland

Derry Girls is a family comedy set against the backdrop of The Troubles in Northern Ireland.

Loosely based on writer Lisa McGee’s experiences of growing up in Derry, the comedy drama follows the exploits of 16-year-old Erin Quinn as she grows up under the matriarchal guidance of her hardnosed mother and unimpressed school principal Sister Michael.

McGee, who previously created C4 sitcom London Irish and has written for shows including C4’s Indian Summers and BBC3’s Being Human, says Derry Girls’ characters are “basically me, my friends and my family”.

She wrote the six-part comedy to reflect the warmth and humour of Northern Irish families like hers growing up during the conflict.

“There have been a lot of TV shows and films focused on the more tragic events of The Troubles but there was great joy and humour in that time and I wanted to tell the story of the Northern Ireland I loved,” McGee says.

“The Troubles were part of the tapestry, but ordinary people had to just knuckle down and get through it.”

Executive producer Liz Lewin commissioned a script of Derry Girls after laughing at McGee’s stories of her childhood. “Lisa talks about her life growing up with such warmth and humour and we wanted to try to recreate that,” she says.

”Just because you’re living in a war zone doesn’t mean that things can’t be funny or that people can’t be selfish”
Liz Lewin, executive producer

The pair set out to create a comedy in the unlikeliest of places: a warzone where teenagers are still self-obsessed and families muddle through.

“Even when teenagers have tough things happening around them, they’re still the centre of their own universes and there’s a universality in that,” McGee says.

Lewin agrees: ”Just because you’re living in a war zone doesn’t mean that things can’t be funny or that people can’t be selfish.”

But the show’s real USP is the authentic writing voice of McGee. “Success in comedy is fundamentally about a voice that gives you a window into a world that you don’t know about and Derry Girls is a good example of that,” Lewin says.

Director Michael Lennox ensured Derry itself was given such a sense of place that it became a character of its own. “It feels very cinematic, it’s got scale,” McGee says.

She says the show’s nostalgia will appeal to older audiences, while its quirkiness will entice younger viewers.