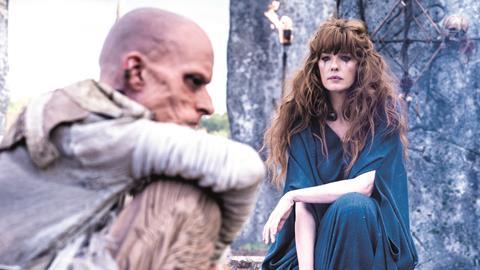 Riding on the coat-tails of Game Of Thrones is Britannia, Vertigo Films and Neal Street Productions’ fantasy drama set during the Roman invasion of Celtic Britain in 43AD.

Rooted in historical fact, the debut co-production between Sky and Amazon US is an ambitious 10-parter that revolves around the story of Kerra (Kelly Reilly), the daughter of a Celtic king who is forced to put aside her differences with her arch-rival, Queen Antedia (Zoe Wanamaker), to face their common foe.

Adding a third, more mystical dimension to the show are the Druids, led by Divis (Nikolaj Lie Kaas), who claim they can channel the forces of the underworld.

Jane Millichip, managing director of Sky Vision, which is distributing the show, says it offers a glimpse of the rich tapestry of cultures that were active in Britain at the time.

“Viewers will know that is it rooted in historical fact but are prepared for you to take them on a flight of fancy. We certainly hope it will appeal to Game Of Thrones fans, who will feel drawn to the themes,” she says.

The tone of the Jez Butterworth-penned show, which boasts an eerie theme tune from Donovan, the Scottish singer-songwriter responsible for Hurdy Gurdy Man, and a distinctive colour palette, offers viewers a truer sense of what Celtic life was like than a slavishly accurate period piece, says Millichip.

“We’re lucky at Sky because you don’t often get the opportunity to pull together a great writer and budget because not all broadcasters can fund drama at that level or have access to the talent,” she adds.

Millichip says that while the show is ostensibly about the history of Britain, it also speaks to the experiences of many countries around the world. “It could be set anywhere really.

It’s pretty universal,” she says. “Many countries experienced that kind of Roman invasion – what is key is that it tells the story of the indigenous people.”

While co-production partner Amazon has taken the US rights exclusively, Millichip has also lined up pre-sales deals with broadcasters including HBO Europe, Starz in the Middle East and Africa’s Iflix.

A launch screening is planned in Cannes, with a DJ set from Donovan.