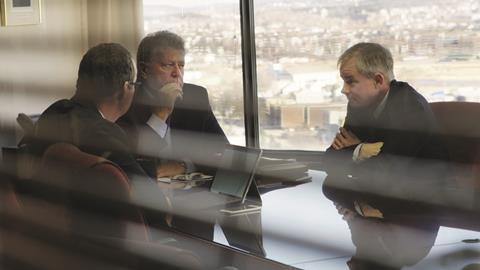 ‘The Suspect has the stickiness that the SVoDs like and with the real-life crime aspect and family story, it has global appeal’

This eOne production, in association with Seven Knots Media, is a true-crime doc that follows the retrial of Dennis Oland, who in 2015 was found guilty of the murder of his millionaire father Richard.

The sixth generation of the family-owned Moosehead Beer dynasty, Richard Oland was a prominent businessman in Nova Scotia with several trucking companies and an investment firm to his name.

Unravelling in the quiet port city of New Brunswick in Canada, the vicious murder of one of the area’s most prominent and wealthy inhabitants captured the national headlines.

This 4 x 60-minute documentary follows Dennis Oland’s retrial, as well as highlighting a justice system broken from its very foundation – it is alleged that once the Saint John Police Department had identified the younger Oland, who owed his father half a million dollars for a loan that bankrolled a divorce from his first wife, as the main suspect, tunnel vision set in and other avenues of investigation could have been missed.

EOne executive vice-president of acquisitions Noel Hedges says the project has finally been revealed after being under a large cloak of secrecy for nearly two years.

Ahead of its TX next February on CBC in Canada, The Suspect will be taken to Mipcom, where Hedges expects to receive attention from SVoD, digital and PSB players.

“The Suspect has the stickiness that the SVoDs like and with the real-life crime aspect and family story, it has global appeal,” says Hedges.

“Real crime sells all over the world and is a popular genre with women. We expect the series to do well in Latin America and Scandinavia, and it will make up a key show within our real-crime slate.”

Producer and distributor eOne has been pushing hard into factual content in recent years after making its name as the vendor of dramas such as The Walking Dead and producer of Rookie Blue, Designated Survivor and Private Eyes.

The company was recently sold to toy firm Hasbro for $4bn (£3.3bn) – a deal that will bolster reserves and allow its executives to double down on premium fare such as The Suspect.

Hedges says the documentary takes viewers through the entire case, digging into the aftermath of the murder and winding a path full of twists and turns up to the retrial and its verdict.

“Richard Oland wasn’t a particularly liked person and came from a community that was relatively poor,” says Hedges. “This series raises questions over the son’s motivation and the police activity. It is a really interesting story, which has plenty of questions left unanswered at the end.”

Richard Oland’s wife had said her husband was never the same after losing a bitter family battle for the helm of Moosehead to his brother. He was described as a “verbally and emotionally” abusive character who had an eight-year affair.

Hedges believes The Suspect is a primetime, primarily post-watershed show that will attract both old and younger audiences as it ticks a lot of boxes in terms of drama, intrigue and scandal.

“This is a ‘did they, didn’t they’ story with labyrinthine complexity and it is very much a premium show,” said Hedges.