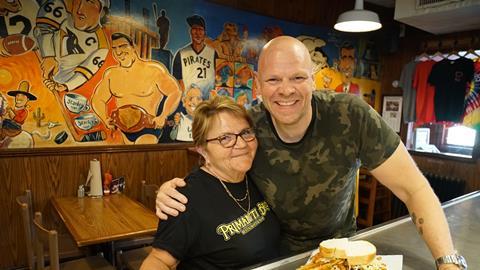 In Tom Kerridge’s American Feast, the Michelin-starred chef takes the road less travelled across the US. Opting for the undiscovered instead of the iconic, he visits destinations such as northern California and Tucson, Arizona.

Kerridge was keen to discover not just delicious food but healthy meals, cooking up nori-steamed pollock on a beach and harvesting cactus fruit.

Over 10 episodes, the chef will also encounter the communities attached to the food – this not just “chop and chat”, says Hat Trick International (HTI) director of sales Sarah Tong. “It’s very much about the people,” she adds. “It’s not the America you know, as he is going to the heart of each community.”

The series melds a cooking show with a travelogue, and Tong expects this to be a boon for HTI as the appetite for food programming remains strong.

In American Feast, Kerridge journeys from coast to coast, meeting both rural and urban communities and encountering different types of cooking along the way.

HTI, the distribution arm of Derry Girls producer Hat Trick Productions, will be taking the Blink Films-produced series to the international market after Tong met with the UK factual indie as part of a strategy to acquire and sell third-party programming.

Part of that plan was hiring sales exec Hana Zidek in a newly created role in April 2018 to build its portfolio. She proved integral in securing American Feast.

Going further back, HTI has sold Kerridge projects such as Tom Kerridge’s Best Ever Dishes in 2014 and Tom Kerridge’s Proper Pub Food in 2013, which came from Outline Productions.

Both shows sold to territories in Africa, Asia and central and eastern Europe, highlighting the British chef ’s international appeal.

Tong is hopeful for similar widespread distribution, with the US,

Australia and New Zealand among the priority territories. “Tom as a talent is important,” she says. “One of the things that works internationally is characters and Tom Kerridge is a great character – charismatic and very well liked.”