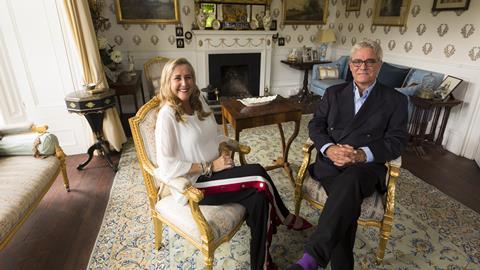 New Channel 4 series The Great Hotel Escape comes from Freeform Productions, best known for producing the long-running and well-travelled property series A Place In The Sun.

In many ways, this 20-part series, which aired in daytime on C4 this autumn, builds on this well-rehearsed and successful formula. But instead of helping househunters find a place abroad, the format follows couples and families who plan to open, or already run, hotels in some of the UK’s most beautiful locations.

These include twin brothers renovating a 19th-century relic into an Italian-inspired B&B and a couple opening the doors to their 18th-century boutique hotel for the very first time.

The series is hosted by Gogglebox stars Steph and Dom Parker, who lend a hand to people who have put everything on the line to run their own hotel and make a go of their new business.

The initial idea for the show was to go behind the scenes of some of Britain’s most historic hotels, explains the producer of the series, Michelle Heeley. However, during the research process, the Freeform team discovered that many of them were being bought and run by people who were quitting the rat race and were brand new to the hotel industry.

Freeform started focusing on this angle, discovering “some fantastic characters and storylines” along the way, says Heeley.

The Gogglebox stars were the obvious choice to host the series, having run their own hotel for 12 years.

“They really got stuck in,” says Heeley. “From offering basic common-sense accounting, to putting an arm around the hoteliers’ shoulders for gentle encouragement, and even giving some of them a dose of reality.”

Heeley adds that right from the early stages of development, from casting to shooting style, editing, music and voiceover, Freeform has aimed for a stylish, polished and high-end feel to the show.

“We wanted it to stand out in the daytime schedule as something that could comfortably sit in primetime,” she adds.

The characters have been followed over a 12-month period and in each case, says Heeley, they were risking everything for their dream of owning a historic hotel.

Filming was not always straightforward, however. “We learned early on that when it comes to renovations, deadlines are never met,” says Heeley.

This potentially had a huge impact on the filming and editing schedule, so Freeform decided to keep both very fluid – which meant it could respond to the ups and downs of the stories as they happened.

“That way, if a renovation had stalled and nothing was happening for a while, we redirected our teams to other hotels,” she adds.

Even though this created a logistical challenge, it meant Freeform could save on resources, keep the team small and not be forced to film when nothing was happening.

Orange Smarty is selling the series, having worked exclusively with Freeform for several years. It sells A Place In The Sun to various territories, including Australia, New Zealand, the Nordics and Benelux, and also represents the indie’s Coast Vs Country, now in its third series for C4.

Orange Smarty founder and managing director Karen Young says Freeform consistently delivers series that “hit the sweetspot of the international market” and The Great Hotel Escape is no different.

Young says The Great Hotel Escape has already generated interest in territories such as Germany, France and Asia: “We’re confident that it will resonate with our existing buyers of both A Place In The Sun and Coast Vs Country. Beyond this, our aim is to break new ground and extend the reach, either by generating new territory sales or by brokering deals on the format through our formats division.”