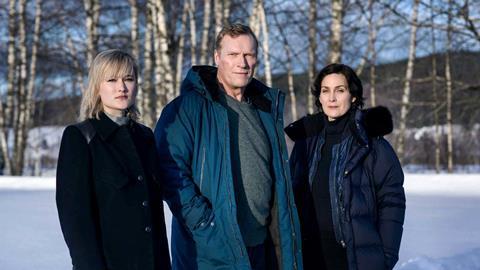 “There are examples of shows like this that have moved into original stories. It’s our ambition to carry on”

With drama remaining at the top of buyers’ wishlists, budgets continue to rise. Reportedly costing €12m to make (about £1m an episode), Wisting is set to be the biggest drama ever produced in Norway, and is a result of the combined efforts of NENT Groupowned SVoD service Viaplay and broadcasters TV3 and ARD.

Based on the novels The Hunting Dogs and The Caveman from the literary series by Jørn Lier Horst, Wisting follows the eponymous homicide detective, played by Sven Nordin (Lilyhammer), as he tackles his most challenging case yet: an American serial killer on his patch.

With his journalist daughter Line (Thea Green Lundberg) chasing the story and putting herself directly in the killer’s path, Wisting’s life is further complicated when he is hit with a shocking accusation.

Chris Stewart, vice-president of sales and acquisitions at distributor Banijay Rights, says Horst’s depiction of the main character will help to ensure the drama does not get lost in the considerable Nordic noir back-catalogue.

“There’s a level of authenticity in this that you don’t see in other shows,” says Stewart. “Wisting the character is not your stereotypical police detective in that he doesn’t have a vice, he’s not alcoholic – he’s more of a family man. Jørn Lier Horst was a policeman, so he’s writing with a level of knowledge that some writers might not have. That makes it feel a bit different.”

While Horst’s novels have sold more than 1 million copies in his native Norway alone, Stewart believes the “transatlantic feel” built into the narrative will help the drama overseas.

These expectations have been further boosted by the casting of Carrie-Anne Moss, star of Marvel’s Jessica Jones and The Matrix trilogy, as a US FBI agent who travels to Norway to help Wisting with the case. The addition of Moss and British actor Richie Campbell (The Frankenstein

Chronicles) felt natural for the drama and has helped Wisting avoid the ‘Europudding’ tag, says Stewart. “It was something that had a genuine reason for a transatlantic casting, which is important when you’re trying to market these kinds of shows,” he adds.

“Obviously, a lot of people are looking at foreign-language drama nowadays, but it always helps to have an injection of English language. We hope that will open it up to a wider audience than for some of the previous Nordic noir-type shows.

“There’s a lot of competition in the market, so what you’re looking for is something that will make your show stand out. The casting is going to help do that, not least Carrie-Anne, but Sven Nordin is also well-known internationally from Lilyhammer.”

Banijay Rights had been tracking Wisting since its pitch to the TV Drama Vision showcase at the Göteborg Film Festival in 2017, buoyed by previous success in Nordic-language dramas through its Yellow Bird and Jarowskij production outfits.

Though foreign-language drama is still considered a “niche genre” in the US, premium players like HBO and Starz have opened the market to distributors and Stewart thinks Moss’s casting will help to attract US buyers. “In the UK, there are the usual suspects – BBC4, Sky and Walter Presents.

Plus, with Walter Presents going more global, there are opportunities to do international deals with various territories,” says Stewart. “Europe is the main focus, but we’ve also sold most of our shows into Australia, whether that’s to SBS or via Walter.”

With further books in Horst’s catalogue, Stewart is enthusiastic about future series. “There are various examples of shows like this that have moved onto original stories. It’s very much our ambition [to carry on], and as far as I’m aware, Viaplay’s too,” he says.

“There’s no reason it wouldn’t come back, and every opportunity that it will be a returning franchise.”