5
Hot Picks: Let The Rest Of The World Go By 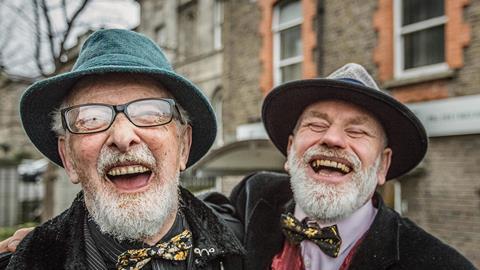 Hot Picks: Let The Rest Of The World Go By

‘The story went viral even before the doc came out, which shows there is interest around the world’

Around four years ago, Dublin-based film-maker Donal Moloney got a call from a journalist friend, tipping him off about an unusual story.

“Two straight guys, Matt Murphy and Michael O’Sullivan, were about to get married to avoid inheritance tax,” he says. “My friend told me that Matt remembered me from a photographic job I had done a decade earlier, so my production partner Patricia Murphy and I went to have a coffee with them.”

Murphy and O’Sullivan asked Moloney if he would shoot a video of the wedding – but the film-maker sensed there was a bigger story to tell. The result was Let The Rest Of The World Go By, a doc for Irish public broadcaster RTÉ. Aired in early 2021, it was a smash hit – securing a 40% share in a Monday primetime slot.

For Moloney, the inheritance tax angle was simply the gateway to a compelling tale of love and friendship: “Matt and Michael had known each other earlier in their lives – and reconnected much later. Matt by this time was old and frail, while Michael’s life had taken a turn for the worse and he was living in his car. Matt suggested Michael become his carer – in return for a roof over his head.”

Their friendship blossomed – to the point that Matt told Michael he would leave him the house when he died. When it became clear that inheritance tax would devalue that offer, the two decided to get married to protect the value of the asset.

Moloney says the pair allowed him to see “their intimate lives”.

The final film displays a complex range of emotions. Rooted in friendship, companionship and respect, it captures the warm humour of the two men, and embeds issues such as homelessness, loneliness and depression into the narrative.

Perhaps surprisingly, there was no serious blowback against Murphy and O’Sullivan tying the knot. The 2015 law changes enabling same-sex couples to wed were obviously meant for the gay community – but they didn’t resent the union, says Moloney.

The doc is now being sold internationally by RTÉ distribution arm RTÉ Global, which has secured early pick-ups from UR in Sweden, and in-flight specialist Spafax. “The story went viral even before the doc came out, which shows there is interest around the world,” says Moloney. “Matt and Michael are big characters, and the themes of love and friendship are universal.”