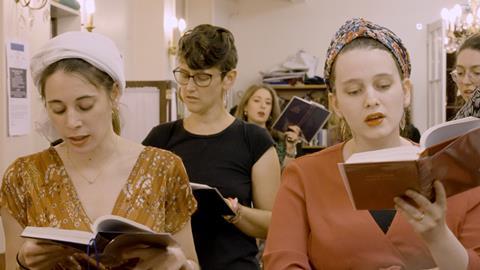 Hot Picks: We Are Jews

There has been a spate of successful shows in recent years about people leaving the ultra-Orthodox Jewish community. Netflix alone has aired One Of Us, Unorthodox and, most recently, reality series My Unorthodox Life.

Three-parter We Are Jews could well tap into audience fascination with Judaism – but it takes a different approach to its predecessors.

Directed by and featuring Ari Beser, it focuses on three young Jews striving to find their place within a centuries-old religion and the world, often in challenging circumstances.

One of the subjects is Myriam Ackermann Sommer, who is training to become France’s first Orthodox female rabbi. Koskasi Keki, meanwhile, is a young Ugandan Jewish leader who is thrust into the role of principal of the Hadassah Primary School in Mbale. Beser himself has left Judaism entirely, but struggles with wanting to be Jewish and keep the values that raised him.

“I wanted to showcase that there is no one way to be Jewish,” says Beser. “It is not just about people leaving [the religion], but people who want to get closer to it.”

Beser says he has wanted to make We Are Jews since 2017. That was the year of the Charlottesville protest, where far-right demonstrators chanted anti-Semitic lines such as “Jews will not replace us”.

Year after year, anti-Semitism has been getting worse, says Beser, citing the 2018 Tree of Life shootings at Pittsburgh synagogue and the 2019 Monsey Hanukkah stabbings.

The director says he also wanted to understand what it means to be Jewish. “The Jews have a PR problem. We’re very poorly understood in the world. We don’t do enough to communicate what Judaism is.”

Beser’s Goss Grove Films has raised funding for the independently produced We Are Jews, and Wag Entertainment is handling international distribution.

Wag senior vice-president and head of sales Janice Strangward says the subjects all want to repair a system they believe in. “I was intrigued by the fact that these young people want to make their situation better, and better for other people too. It was an overall positive message,” she says.

Strangward adds that stories like We Are Jews, which touch on diversity and inclusion, are growing in popularity and the series could work for linear and streaming platforms.