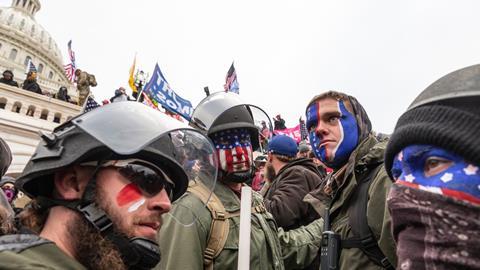 ‘It is very powerful. It is an action film, but every frame and every word is true’

Such is the lowering of the political temperature in the US since Joe Biden took over from Donald Trump, it’s surprising to remember that the country came close to insurrection this year.

The 6 January storming of the US Capitol shocked the world, and Leaving Neverland producer Dan Reed and The Rise Of The Murdoch Dynasty director Jamie Roberts have made what they say is the definitive feature-length doc on the event.

“It’s the first draft of history of the riot,” says Reed. “It is very powerful. It is an action film, but every frame and every word is true.”

In the months leading up to the event, the pair had been developing a project around rising US political and social discontent and had already built contacts with many of the activists and videographers who were at the forefront of the Capitol attack.

So they shifted the doc’s focus to the riot itself, and it was rapidly greenlit by HBO and backed by BBC Current Affairs.

Everyone featured was directly involved or had direct knowledge of the event. There is no voiceover – instead, the story is narrated by key participants and insiders.

“The formula is players not pundits,” says Reed.

As well as providing a clear timeline of events, the doc aims to answer why the riot happened. Reed highlights the “remarkable” interviews Roberts secured with police officers who were there, and who talk about the violence they encountered. They rebut the claims of many on the right “that it was just a touristic visit and they strolled around and hugged some cops”, says Reed. “

What the film does is act as accounting and audit. This is the true story of what happened with all the violence – it’s incontrovertible because it is happening right in front of you on camera.”

Four Hours At The Capitol is being distributed internationally by Abacus Media Rights and has already sold widely to key territories such as France, Germany and Australia. HBO has also acquired Latin American rights. It will air on BBC2 in the UK and HBO in the US on 20 October.