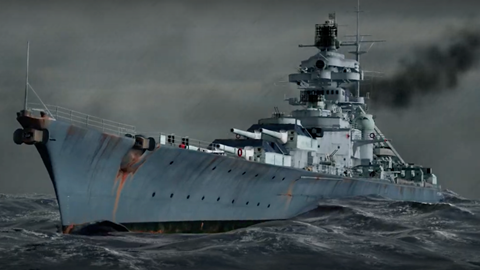 ‘Those stories, from the sailors and aviators involved in the battle, really bring the entire project to life’

The hunting of German battleship the Bismarck is one of the most iconic stories to emerge from World War II. Now it is being retold in a one-hour special documentary that uses CGI, drama reconstruction and compelling first-hand testimony.

The Bismarck was a formidable vessel that gained notoriety when it sank the Royal Navy ship HMS Hood in May 1941, killing 1,500 sailors. In response, British PM Winston Churchill ordered his forces to seek out the Bismarck and exact revenge. What ensued was the most famous sea battle of the conflict.

Beyond Rights head of sales Simona Argenti says: “This documentary is based on Iain Ballantyne’s best-selling book, 24 Hours To Doom. It was brought to us as a TV concept by producer David Gilbert, who has made highend factual films for the likes of the BBC and National Geographic.”

What really set the project apart, Argenti adds, is first-hand testimony that Ballantyne gathered while researching his book. “Those stories, from the sailors and aviators involved in the battle, really bring the entire project to life.”

Aside from the appeal of the eyewitness accounts, Argenti says it felt like the right time to revisit the story: “There is demand from buyers for high-quality history programming,” she says. “Plus it’s the 80th anniversary of the ship’s sinking.”

Beyond Rights pounced on the project at an early state – and holds international rights. The first major deal is a pre-sale to Channel 4. “We’re now in the final stages of post-production and will be presenting the end result to buyers around Mipcom,” says Argenti.

The fact-led approach will appeal to audiences across most European territories, she adds, with France, Germany and Italy key targets, alongside English-speaking markets.

As for the platforms where it might play, Argenti sees a natural affinity with public broadcasters. “But the production techniques and the countdown approach would work for a commercial audience. The streamers are also a potential home for this kind of factual event.”