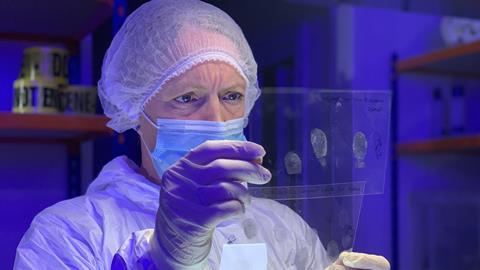 Channel 5 has gone big on true crime docs in recent years. From Countdown To Murder to Murder In A Small Town, Murder Files and Murdered By…, the genre has become a core part of C5’s offer.

One of the latest to land is Killer At The Crime Scene, which debuted on spin-off channel 5 Star in August.

The series focuses on the crime scene itself, exploring how specialist forensic teams and detectives collate evidence at the scene of a murder to find vital clues to catch killers.

Combining expert contributors and interviews with police, as well as archive footage and reconstruction, the series tells the story of challenging murder cases that have been presented to the authorities.

For example, it looks at how light-source technology and fibre analysis led to the conviction of murderer Stephen Marshall, known as ‘The Jigsaw Killer’, who dismembered his victim and scattered the body parts across Hertfordshire.

Executive producer Matt Young says it stands out from other true-crime series for the way it places the audience in the hours after a crime has been committed, and how it reveals the work of the investigators.

Access to the detectives during the investigations is key, says Young. He also cites the participation of Sarah Thirkell, a leading forensic expert, and the inclusion of testimony from some of the victims’ families for putting a human face to the events.

Passion Distribution boarded the series having worked with Spun Gold before. Head of acquisitions Seán Wheatley says: “It isn’t a typical true-crime series. The focus on science means this can reach a different audience as well as your archetypal ‘true-crime’ follower. We felt this scientific approach would engage male audiences in a way that some other shows may not.”

Passion director of sales and co-productions Nick Tanner says Killer At The Crime Scene’s blend of closed-episode stories, volume and points of difference make it suitable for “prime-time scheduling on linear channels, and strong usability for thematic channels, particularly in northern Europe territories and across CEE”.