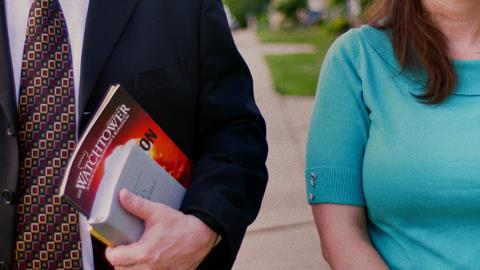 Much has been documented about Scientology in the media, but Jehovah’s Witnesses have largely avoided such scrutiny

Hollywood producer Aaron Kaufman, best known for his collaborations with Robert Rodriguez on Sin City: A Dame To Kill For, has directed a film alleging corruption within the Jehovah’s Witnesses for his non-scripted debut.

A former third-generation Jehovah’s Witness himself, Kaufman felt he was in a unique position to gain access to the secretive religious group that has 9 million adherents, and spent four years researching the ways in which the leadership has protected paedophiles among its congregations. His film, Vice Versa: Crusaders, was produced by Vice Studios and Kaufman’s label Lotus Land Entertainment, with support from Moxie Pictures and RYOT.

The director was inspired by Alex Gibney’s 2015 film Going Clear: Scientology And The Prison Of Belief – struck by similarities in the way the two organisations operate.

Much has been documented about Scientology in the media, but Kaufman noted that the Jehovah’s Witnesses – and its Watchtower Bible and Tract Society leadership – have largely avoided such scrutiny.

The film claims to have uncovered documents, including a database of child abusers in the group’s ranks, that were created by the Watchtower leadership to minimise legal action.

The director has emphasised that the film has been fact-checked and that the people he interviewed “didn’t just have a gripe against the religion or were critical of it” and are “people that had fundamentally had their lives altered because of the policies of the Witnesses”.

For Vice’s one-year-old distribution arm, the film is a welcome addition to its catalogue and, since it aired at the end of July, the series has already surpassed Vice TV ratings toppers including The Devil You Know and QAnon: The Search For Q, says senior vice-president Bea Hegedus.

Due to the controversial subject matter, the film is more of a cable, SVoD or pay-TV play, but that partly depends on the territory, she adds. Regular terrestrial broadcast buyers of Vice content include Channel 4 in the UK, while Vice also has an ongoing supply deal with SBS in Australia. There have also been several pre-sales to date, including to an SVoD based in Japan.