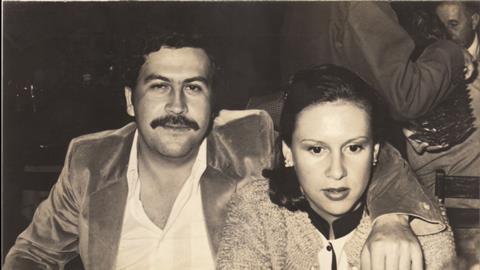 “How often do you see a global name’s home-movie footage? How could the public not be interested?”

Pablo Escobar’s son has made no bones about his dislike for Narcos – Netflix’s dramatisation of his father’s life. Speaking in 2016, Sebastián Marroquín identified almost 30 issues with the drama, concluding that it had “insulted the history of a whole nation”.

Discovery Latin America’s Tata – Escobar’s Widow will illicit no such response from Marroquín, as the idea originated from him after he uncovered archive footage of his mother Victoria Eugenia Henao that had remained hidden for a quarter of a century.

Marroquín was at Mipcom in 2017 and, with Canadian producer Telegramme Media, pitched the idea to Lilla Hurst, joint managing director of distributor Drive.

Hurst was immediately keen, hoping to build on the “huge amount of interest” in the Escobar story generated by Narcos and a string of recent docs about the Colombian drug lord.

Marroquín revealed reams of archived film to Telegramme –home videos of a teenage Henao as she fell in love with Escobar, who was around 20 years her senior.

“It was extraordinary footage,” Hurst says. “You realise how naïve she must have been, oblivious to the realities of the world she was about to become part of. How could the public not be interested in that?”

The two-parter will provide an antidote to “false and sensationalist” retellings of the Escobar history – fulfilling Henao’s desire to reveal the story of a life lived alongside one of the world’s most notorious drug-traffickers.

Hurst believes the doc could kickstart more commissioning of female stories, giving women a voice in areas that have traditionally been male-dominated.

Following the success of various SVoD-related Escobar shows, Hurst will be keen to sell it to digital players and under her territory-by-territory approach it has already been snapped up by French-Canadian SVoD Club Illico.

However, she believes it could work just as well on traditional channels: “It’s premium, it’s primetime and it will generate press.”

Hurst also rejects the idea that Tata – Escobar’s Widow will clash with similar programming in what is becoming a crowded feature doc market.

“The level of exclusivity carries currency with other channels,” she says. “How often do you get to see a global name’s home-movie footage from when they’re falling in love?”