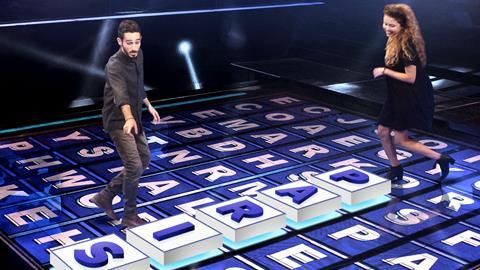 “The action happens on the floor, which is very visual. It’s not a straight-forward quiz”

The Search has to be one of the most straightforward gameshow formats around – and that could be the key to its success in international markets.

Essentially, it is a supersized TV version of the word search puzzle book games that sell all over the world and help millions of people while away their time.

The format idea was brought to Keshet International by Youngest Media, the indie run by former senior Endemol execs Lucas Church and David Flynn, whose credits include The Million Pound Drop and Pointless.

“They have a great track record, so it was an incentive in itself to collaborate with Lucas and David,” says Keshet International chief operating officer and president of distribution Keren Shahar.

The idea for the show was hatched at Youngest Media after a member of its development team saw a child doing a word search puzzle on the train, and started to play along over his shoulder. However, translating the concept to TV came with its own set of challenges.

The producers have taken the word search area and opened it up so that it appears on a giant interactive video floor. They have also added a physical element to the show, forcing pairs of contestants to work together on the floor to hunt the words – while one finds the beginning of the word, the other must locate the end to unlock it.

Youngest honed the format with Keshet International’s development team, pitching it to commercial channel Keshet 12 in Israel. The channel has ordered a 30-minute version of the show.

Shahar says the familiar premise should make it suitable for any territory. She adds that the format is highly flexible and can also be produced in bulk. It can scale up to a 60minute show if a broadcaster wants to fill a longer slot. Keshet will also offer broadcasters a play-along app version of the show.

Shahar expects The Search to generate interest in key Western European territories and says the sweet spot for the show is in an access-prime slot. However, it could also play well in daytime or even primetime, she adds.

In terms of audience, Shahar says it is a cross-generational show that works as both a comforting, familiar game for older viewers and a relatively easy word search for younger audiences.

The game is not too high stakes, either. The contestants play for money, although broadcast buyers can decide how big the pot is. Every round, a pair of contestants is eliminated, with the final pair playing for the cash prize.

Asked what makes The Search stand out, Shahar picks out its distinctive, visually engaging and interactive nature. “The action really happens on the floor, and the floor is very visual.”

Because pairs of players are hunting for the words against the clock, there is “a lot of shouting and doing” – it is not a straightforward quiz. “It’s fun to play, but it is also fun to watch,” Shahar adds.

Keshet International recently expanded its footprint in the UK, acquiring Greenbird Media, which has stakes in 13 indies, including Tuesday’s Child, Rumpus Media and Kalel Productions.

The deal gives Keshet a direct pipeline to English-language, unscripted titles to complement its roster of scripted dramas.