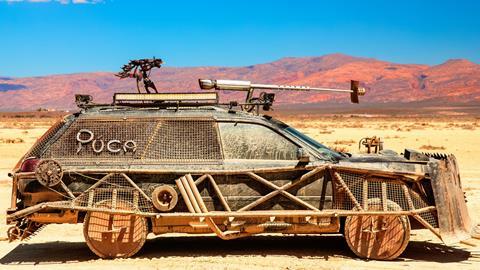 “Has there ever been a show where people turn cars into weapons and try to kill each other?”

According to Primal Media co-founder Mat Steiner, that question led to the creation of Carnage, an entertainment show that is a cross between Mad Max, Robot Wars and Wacky Races.

Over six episodes, 30 teams transform vehicles – from a Porsche to a hearse – into battle machines equipped with weaponry such as circular saws, fl amethrowers, snowploughs and stinger racks.

The combat cars and their drivers then travel to South Africa to fi ght it out in a custom-built arena in the desert, where the temperature can rise to 48°C. The last car standing wins.

The desert arena forms a production hub where Lionsgate hopes to persuade other international broadcasters to come and fi lm their own cost-effective local versions of the show.

Peter Iacono, president of international television and digital distribution at Lionsgate, says the format will appeal to both linear and digital channels.

“Due to the magnitude, genre and scope of the series, we are targeting major markets such as the US, Europe and Australia, as well as strategic markets like Asia and Latin America,” he says.

Carnage has been greenlit in the UK by Sky 1. Steiner says the show is not just for men and boys who like cars, but will also appeal to a family audience.

Carnage, he explains, doesn’t take itself too seriously – and the key is in casting a broad range of relatable contestants. “The nerd-ometer is not set too high,” jokes Steiner.

One of the teams, for example, comprises a father and his two teenage daughters, who have customised a Range Rover with armour plating and a military chassis. Driving this huge fighting contraption into battle is the 19-year-old daughter.

Not surprisingly, health and safety has been a signifi cant concern in the production of Carnage, which is packed full of crashes.

“It’s been an important part of the development of the show,” says Steiner, who explains that “an enormous number of safety protocols” were put in place during production.

By the end of the series, the worst injury any of the contestants had suffered was a bruised elbow. The desert setting was crucial.

“We could have just filmed it all in Luton [a commuter town outside London], but we wanted to go big in terms of scale and escapism,” says Steiner

That’s because entertainment shows need a feature film quality to stand out, just like TV dramas, he adds. “These days, you’ve just got to make it big.”