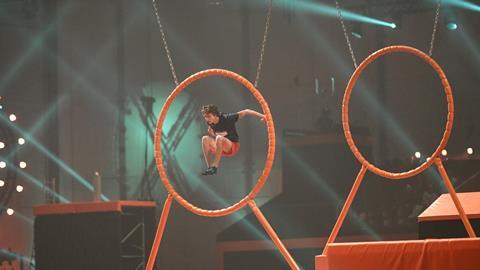 “Big Bounce Battle is cooler and younger than Wipe Out and Ninja Warrior. It feels exciting to watch”

Anyone with young children will know that trampolining is a popular leisure activity, catered for by a new generation of trampoline parks the world over.

Big Bounce Battle is a brand new entertainment format that looks to tap right into this phenomenon.

The series features contestants who race against the clock to conquer spectacular obstacle courses using trampolines. In many ways, it’s a fast and furious cross between trampolining and a bouncier form of parkour – a style of ‘freerunning’ that involves jumping and climbing.

The format was originally developed by Endemol Shine Netherlands, but was taken over by Endemol Shine Germany, which has produced it for commercial network RTL, where it launched in January.

RTL has had success with Big Bounce Battle. It is the highest-rating non-scripted launch this year in Germany, playing strongly with younger viewers, particularly the 14-29 age group.

Endemol Shine Group chief executive of Creative Networks Lisa Perrin says Big Bounce Battle has received a lot of interest from US broadcasters, with two networks interested in producing their own version. It’s also attracting attention from France and Italy.

Perrin describes Big Bounce Battle as a feel-good, broad family watch with relatable contestants who are physically fit, but not unattainably so.

Unlike other physical gameshows such as Wipe Out, it is not played for laughs. Nor, like Ninja Warrior, do participants have to be incredibly fit to take part. Rather, it is “cooler and younger” in style, is cut in a very visual and contemporary way, and is warmer in tone.

“It feels exciting to watch,” says Perrin, who adds that many clips from the show have gone viral after being posted on Snapchat and Facebook.

The German series of Big Bounce Battle was filmed in a disused warehouse in Holland. Perrin says that most of the countries currently interested in the format would produce it at full budget, creating their own trampoline course locally.

However, Endemol is also looking at creating a more cost-effective Big Bounce Battle set in a European hub where broadcasters could go to film their own versions.

Perrin believes it will appeal to linear channels to play in primetime. But it could also be scaled up for an OTT platform, working as a global format in which teams from different countries compete against each other.