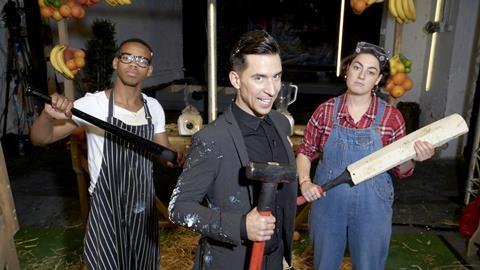 Rage Room is a studio-based comedy entertainment show commissioned in 2017 for Channel 4’s VoD service All 4.

The Mighty Productions’ series was picked up by Armoza Formats early this year. In each episode, two annoyed contestants pitch to a host and guest celebrity judge about an issue that drives them to distraction.

“It can be anything from a hatred of queuing to fast-food restaurants that don’t give you enough ketchup. The host and judge then decide which person has the stronger case,” says Armoza chief operating officer Amos Neumann.

Once the decision has been made, a designer is brought in to create a ‘rage room’ that represents the winning contestant’s pet hate.

“The winner is then let loose in the room with specially created weapons,” says Neumann. “They get to smash up everything in a cathartic and comic finale.”

Neumann says Armoza fell in love with the format immediately “because it is a fun show that will appeal to international audiences”.

“It also attracts younger audiences with its contemporary urban location and subject matter. A lot of broadcasters these days skew towards the 55-plus demographic. We wanted a format that could help bring younger viewers back to TV.”

That said, Neumann means TV in the broadest sense of the word. “Channel 4 aired this as a 15-minute show on All 4, so our message to clients is that the show can be made in different ways.

“It can be reformatted as a half-hour show for linear TV, but it could also be a shorter format on a broadcaster’s digital platform, or a standalone digital platform. The key point is that we want to offer various solutions.”

Other strengths, says Neumann, are that it is low-budget and works well with social media. The final scenes, he says, lend themselves to digital content sharing.

The series will launch in Italy as Il Supplente.