Paris-based Studiocanal, the producer-distributor of media giant Canal+ Group has a strong European ethos to complement its French origins.

Sporting a library of over 5,000 titles spanning more than 1,000 hours of current and library content, Studiocanal also creates 200 hours of TV series per year via its group of in-house producers which include ownership of high-profile indies such as the UK’s Red Production Company and Munich-based Tandem Productions, and stakes in UK indies Urban Myth Films and Benedict Cumberbatch’s SunnyMarch TV, and Spain’s Bambú Producciones.

Francoise Guyonnet, executive managing director of TV series, says Studiocanal is “trying to create more and more within the group” – citing the advantage of having broadcaster Canal+ within the umbrella structure. However, this does not preclude Studiocanal from working with external outfits to help feed its pipeline.

“Most of the Canal+ Créations originales [original series] are made by independent French producers,” she says. “Not everything is coming from our production companies.”

Despite the constraints placed on production during 2020, Guyonnet adds that Studiocanal did not “decrease our investment” in projects, and strove to “keep productions going, invest in talent and keep on making European content”.

“Distribution is a year-round business, with pre-sales and production financing happening continuously,” she says. “The pandemic has not stopped the greenlights, it’s just the [uncertainty] around shooting and filming. Of course, this has had a huge impact in 2020.”

It culminated in Studiocanal launching 12 series from nine different territories at Mipcom last October, including period crime drama Paris Police 1900 (ITV Studios-owned Tetra Media) and thrillers Shawdowplay (Tandem and Bron Studios for Viaplay) and Possessions (A Haut et Court TV and Quiddity) – which has been picked up by US global streamer HBO Max.

Drugs and crime-themed création originale ZeroZeroZero, from Gomorrah producer Cattleya and based on the book by Roberto Saviano, has recently made its bow on Sky Italia and Canal+, and airs on Sky Atlantic in the UK. Studiocanal has recently announced a further collaboration with the ZeroZeroZero partners for a reboot of classic western Django.

With premium content from Studiocanal’s in-house partners travelling to international broadcasters and platforms, Guyonnet has earmarked collaboration, co-production and internationalising of individual labels’ slates as a key strategy for her company. And the reason isn’t solely financial, despite the inexorable increase of high-end drama budgets.

“Studiocanal is a hub for European talent,” she says. “There are local productions – pure French, pure Spanish, pure British – which are amazing. But if you want to tell bigger stories, you need some co-pro partners.

“We want to produce content that can travel internationally. Bambú is working with Netflix, Starz and Amazon, they’re all global players. We want to explore co-pros with French-UK or Spain-UK producers.”

A recent example is Urban Myth’s adaptation of War of the Worlds, co-commissioned by Canal+ and Fox and travelled to US with premium cable channel Epix. Years & Years, Russell T Davies’ BBC/HBO near future, dystopian family drama was another which travelled globally for Studiocanal.

The Manchester-based indie, which is behind ITV’s recent ratings hit Finding Alice, had a big hole to fill following Shindler’s departure and Doole’s appointment was a major statement. Besides her north of England roots which would help maintain the “northern DNA” that is so crucial to Red, Guyonnet says her background would help expand the producer’s global mind-set.

“We can put Red [with] another label if we [want to] go internationally with [a Red project],” she says. Red is producing English-language content, and it’s a real opportunity to reach an international audience.”

Guyonnet is also enthused by the evolution of scripted programming which has accelerated in the last year or so as audiences’ viewing habits and interests grew more sophisticated. Studiocanal has been investing in “shorter-format” content, ranging from 10-minutes to half-hour dramas, besides other media such as podcasts.

“Audiences want to escape but trust the talent and creatives to give them thought-provoking content,” Guyonnet says. “Inclusion is everywhere in storytelling at the moment, because people want to discuss it. Drama is a good way to discuss strong subjects.” 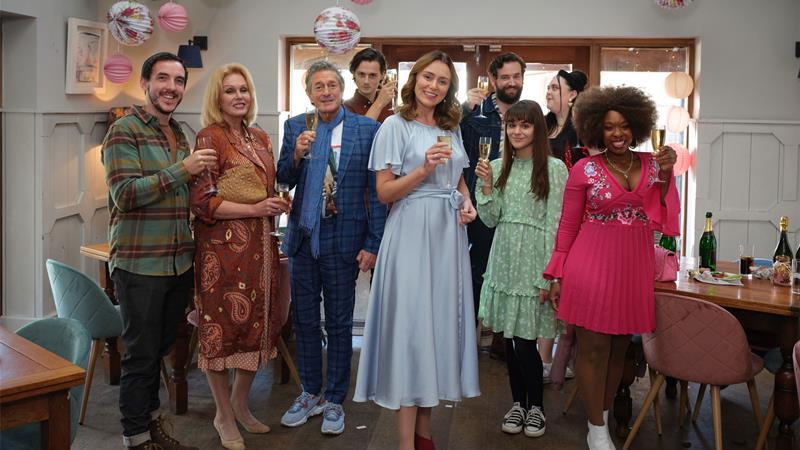 During the opening months of 2021, UK broadcasters, particularly ITV, have gone big on crime and detective dramas, particularly series drawn from real events. In Finding Alice, ITV travels a different path, with the dark comedy family drama exploring myriad themes – many of which have been felt during the ongoing coronavirus pandemic.

Keeley Hawes stars in the title role as a mother and wife who is supposed to be enjoying the adventure of moving into her new house. When she finds her husband Harry dead at the bottom of the stairs, Alice must negotiate not only the feelings of loss and abandonment, but also her new smart home, designed by Harry. Alongside unscheduled and often unwelcome visits from Harry’s parents and a lack of support from her own, Alice also quickly discovers Harry’s business debt wasn’t the only secret he had been keeping from her.

Produced by Red in association with Bright Pictures TV, Buddy Club Productions and Genial Productions, the drama averaged 5m viewers an episode after seven-day consolidation across its recent six-part run on ITV, with overnight audiences averaging over 3m. Its opening episode consolidated to 8.2m, making Finding Alice one of the biggest drama launches of 2021.

“This lighter content is what people are looking for at the moment,” says Francoise Guyonnet, executive managing director of TV series at Studiocanal. “It is a darkly comic, very intimate series, with a strong narrative and universal themes like grief, life, love. It can and has resonated with large audiences.”

The series was recently re-commissioned for a second run by ITV, with Red producing and Doole exec producing alongside Shindler, Goldby, Nye and Hawes.

Guyonnet says the drama can fit on the “global players” but will also be sold with a “territory-by-territory” approach, given its PSB credentials. International sales are close to being announced.

“It’s what the Brits can do best but with a very universal appeal. It’s a story which can happen everywhere in the world,” she adds.